A leader of Rashtriya Swayamasevak Sangh (RSS) was critically injured while his personal security officer died after unknown gunmen  fired on them in Kishtwar district of Jammu and Kashmir on Tuesday.

The leader has been identified as Chandrakant Singh. The two were fired near the district hospital Kishtwar. Singh, who  works in the health department, was at the Out Patient Department of the hospital when the attack took place, an official spokesman said.

Government has clamped curfew in the  district Kishtwar town. The manhunt has been launched  to nab the attackers. Mobile Internet service was also snapped in  Kishtwar and the nearby Doda district. 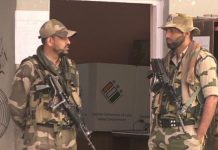