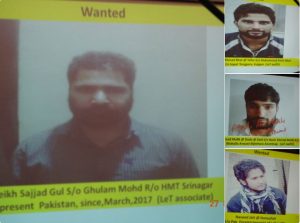 Jammu and kashmir Police in an official tweet released photos of 4 suspects involved in the killing of Rising kashmir editor Shujaat Bukhari.

Inspector General of Police Kashmir Zone, Swayam Prakash Pani on Thursday told reporters in Srinagar, “The conspiracy was hatched in Pakistan and executed by the three terrorists here. The investigation has established that it was done by Lashkar.”

“We have tangible evidence against the accused and detailed investigation would be produced,” Pani said.

Shujaat Bukhari along with his two security guards  was shot dead in Srinagar on the eve of Eid-ul-Fitr on June 14.