Srinagar: Jammu and Kashmir  Governor Satya Pal Malik has got another advisor. On Wednesday, the state government   appointed former IAS officer Skandan Krishnan,  a former IAS officer of the 1982 batch of Tamil Nadu cadre, as the fourth advisor.
“Sanction is hereby accorded to the appointment of Shri Skandan Krishnan, IAS (Retired) as Advisor to the Governor of Jammu and Kashmir with effect from the date he assumes charge,”an order issued by the state’s General Administration Department  read.
Krishnan has held various senior positions in  Tamil Nadu, where he served  for 25 years. He later  joined the Government of India where he held the important assignment of Joint Secretary in-charge of Centre-State Division, Kashmir Division from 2007 to 2012. He also held charge of the Additional Secretary (Centre-States) Division from 2012 onwards.
Other four advisors to J&K Governor are Vijay Kumar, Khurshid Ahmad Ganai and Kewal Kumar Sharma. In December B B Vyas resigned as governor following his appointment as  a member of the Union Public Service Commission (UPSC).
The appointment has come when the state is looking forward to  Lok Sabha  and possibly Assembly elections in the middle of this year. 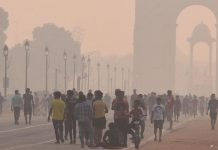