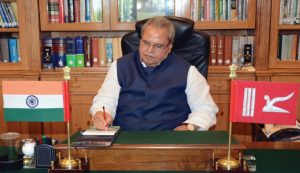 When Satya Pal Malik was appointed  Jammu and Kashmir Governor on August 21, people across the Valley viewed it the BJP’s bid to push its agenda on the abrogation of Article 35 A and 370. Although, Malik did not rake these issues for the last over three months but has been mired with controversies. His actions and statements have even united the rival political parties of the state-the National Conference and Peoples Democratic Party and have been widely opposed by other parties including separatists, employees, and traders, overshadowing all the good work that his administration has achieved.

Malik whipped a political storm when he claimed that politicians had set aside the J&K Bank’s selection of 582 candidates for appointing their political workers. The revelations made by the Governor took people by surprise who sought investigations.

J&K Bank Chairman Parvez Ahmad later in a statement claimed that there were absolute transparency and fairness in the recruitment process. Following which the Governor called JK Bank a “wonderful” institution.

He also questioned the functioning of the Public Service Commission, saying that a youth was selected for the Kashmir Administrative Services without appearing for the exam.

Malik’s remarks about “huge corruption” plaguing the state did not go well within the political parties. The Peoples Democratic Party called him “defaming” Kashmir.

On November 21, he ordered the dissolution of the 87-member state assembly, that was kept suspended since June 21, following claims for government formation by two groups — BJP-backed Sajad Gani Lone and PDP’s Mehbooba Mufti with the support of NC and Congress.

Governor’s cited four main reasons for dissolving the Assembly including “extensive horse-trading and possible exchange of money” and the “impossibility” of forming a stable government by parties with “opposing political ideologies”. Following which senior National Conference leader Omar Abdullah demanded an investigation into Governor’s claim that there were horse-trading and the use of money in the attempts towards government formation in the state.

The Governor later said that had he looked towards Delhi for instructions, Peoples Conference chief Sajad Lone would have formed the government. “I did not want to be remembered as a dishonest man and so I dissolved the assembly,” the Governor had said, hinting towards the Centre’s interference into the functioning of the government. The statement did not go well within the BJP and Peoples Conference.

Political analyst professor, Noor Mohammad Baba, said that dissolution of the assembly was an advantage for the PDP. “There was a constant talk going that many PDP MLAs may support the BJP and PC in government formation. As the assembly has been dissolved, there are now fewer chances, the disgruntled may leave the PDP,” Baba added.

The day after dissolving the assembly, the State Administrative Council (SAC), headed by Malik, exercised the state government’s controlling 59.3 per cent share in the J&K Bank to convert it from being a privately-run banking entity into a public sector undertaking (PSU). Apart from giving the government (state legislature) unbridled control, it also brought the bank under the purview of the Right to Information (RTI) Act. The order was issued without any consultation with the bank’s board of directors (comprising the RBI and state government nominees).

It was seen another blow to J&K’s constitutionally guaranteed autonomy. The move to alter the status of JK Bank evoked sharp criticism from all political parties, including separatists, traders, and its employees.

Senior National Conference leader and former finance minister Abdul Rahim Rather said it has created a political interference and will bring JK Bank at par with failing public sector undertakings.

“It is shocking that the JK Bank has been reduced to a public sector undertaking,” he said.

The bank employees have also opposed the decision and have been protesting against the order.

Noted economist Professor Nisar Ali said the state administrative council (SAC) approved the proposal of treating the JK Bank as a public sector undertaking (PSU) has created fear of “uncertainty and desperation” among the stakeholders.

Columnist Fida Iqbal said a large number of organisations from the socio-political spectrum has raised their voice against this move. “Maybe they are right when they say it is a clandestine move towards diluting state’s special status as envisaged in the constitution. Where were they when other vital decisions were taken during their regime to impose certain laws that otherwise were not applicable to the state,” he asked.

“Governments decision to declare JK Bank as PSU cannot be entirely correct especially its timing and the authority to change its shape, but it is not wrong as well as many red arrows point towards the working and health of the bank particularly for last more than a year,” he added.

The escalating row prompted Malik to allay fears, who reassured to a delegation of bank officers that he would re-examine the order and that the bank would continue to be regulated by the RBI.

Malik on November 28 also approved the annulment of the Jammu and Kashmir State Lands (Vesting of Ownership to the Occupants) Act popularly known as the Roshni Act.

The Roshni Act envisaged the transfer of ownership rights of state land to its occupants, subject to the payment of a cost, as determined by the government.  The decision to repeal the Roshni Act came after demands from Ankur Sharma, an advocate. Sharma, who was instrumental in setting up the Hindu Ekta Manch to support the accused in the gangrape and murder of the 8-year-old Kuthua girl in January.

On November 20, Sharma asked the Governor to withdraw the Act in order to “defeat the jihadi war in the form of demographic invasion of Jammu”.

The SAC has ordered cancellation of all pending applications seeking vesting of ownership rights of state lands to their occupants.

The Gujjar and Bakerwal groups have been upset with the repeal of the Act. They said that while the rich and influential managed to grab the benefits, their applications had remained pending.

There was also a political storm after reports appeared in the media that “changes” were being proposed to the rules governing the issuance of permanent resident certificates.

The former chief minister and leader of National Conference, Omar Abdullah tweeted after he wrote a letter to the Governor, “My letter to @jandkgovernor on behalf of @JKNC_ placing on record our concern about reports of changes being proposed to the J&K permanent residents’ certificate rules.”

However, Malik said his administration was not making or considering any changes in the procedures governing the issuance of permanent resident certificates (PRCs) in Jammu and Kashmir.

“As for the matters in the rest of your letter, I would like to highlight that no changes in the procedural rules governing the issue of PR certificates will ever be done without larger consultations with all stakeholders,” the Governor replied.

Now, the Governor administration is mulling to grant the divisional status of Ladakh region. The PDP chief and former chief minister Mehbooba Mufti has warned agitation if the government did not stop “anti-JK” decisions. She accused the Malik of “encroaching” upon political space by raking sensitive issues.

“Over the past four years, the people in the state have suffered a lot due to the incompetence and mismanagement of the BJP government. And now it seems same is being repeated during the Governor rule. People of Jammu and Kashmir are paying a heavy price for the failed policies of BJP government,” Monga said.

The author is a Srinagar based journalist 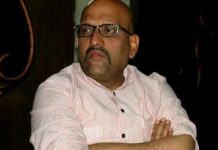 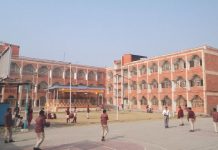 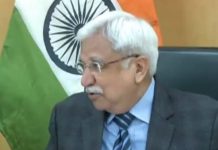