Two militants and a CISF sub-inspector were killed and four security personnel injured in an encounter between the militants and security forces at Jalalabad, Sunjwan in Jammu district early Friday, police said.

“Two #terrorists killed in the encounter at #Sunjwan #Jammmu. 2 JKP personnel and 3 CISF personnel injured out of which one attained #Martyrdom. The killed terrorists were a part of the suicide squad, ” ADGP Jammu Zone, Mukesh Singh said in a statement.

Singh said that they had laid a cordon of the area during night hours following a tip off about the presence of militants who, he said, were planning  a possible fidayeen attack.

A senior official of the paramilitary force said the militants fired at the bus killing Assistant Sub-Inspector (ASI) S P Patil and injuring two other occupants of the bus.

In the subsequent encounter, both militants were killed. 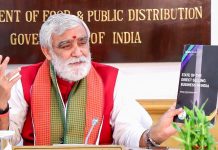