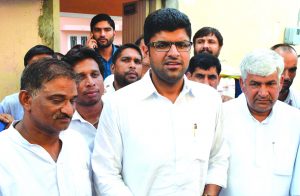 The Bharatiya Janata Party appears to be facing a little ally problem ahead of the high-pitched Delhi Assembly elections on February 8 with its Haryana partner Jannayak Janata Party asking for around 18 of the 70 seats.

Results in Delhi would be out on February 11.

In 2019, the Dushyant Chautala-led JJP had contested the Haryana assembly elections separately but forged an alliance with the BJP post-poll to share power in the state. Dushyant became the deputy chief minister while the BJP repeated chief minister Manohar Lal Khattar.

Ever since the BJP was badly defeated by the ruling Aam Aadmi Party in the 2015 Delhi polls, winning just 3 of the 70 assembly seats, the right-wing party has been trying hard to regain power in the national capital.

Now, the new demand from the JJP has come as a surprise as the regional ally has asked the BJP to have a pre-poll alliance with it and give it around 18 seats in the Delhi assembly elections. Otherwise, the JJP has told the BJP, the ally would go solo in the national capital in a move that will only end up hurting the saffron party.

The JJP which was formed last year after Dushyant parted ways with the Indian National Lok Dal formed by his grandfather OP Chautala, believes it has a fair chance of winning in the outer-Delhi seats with a sizeable Jat population like Najafgarh, Mundka, Mahipalpur, Mehrauli, Nangloi, Badarpur, Devli and Chhatarpur.

Dushyant has reportedly told the BJP to decide on the seat-sharing for Delhi soon or else his party would declare its own candidates. The JJP leaders said they have nothing to lose by going solo but will certainly eat into the BJP’s vote share.

That may not be good news for the saffron party which rules the centre but is desperate to hold power in the national capital where it had won all the seven parliamentary seats in the 2019 Lok Sabha elections.

For the BJP, AAP founder and Delhi chief minister Arvind Kejriwal is the biggest road block besides the Congress which too is trying to revive itself in the state. The Congress did not win a single seat in the 2015 assembly polls.

Poll watchers say the BJP allies have become aggressive after the party’s recent performance in the Haryana and the Maharashtra assembly polls where it emerged as the single largest party but could not secure a simple majority on its own.

In Maharashtra, though BJP ally Shiv Sena contested the polls jointly but ditched the saffron party post-poll to join hands with rivals Congress-NCP and share power. The BJP had won 105 of the 288 assembly seats in Maharashtra but the Sena with 56 chose to align with the Congress 44 and the NCP 54 and form a coalition government.

In Haryana the BJP won 40 seats in the 90 member House. The JJP had 10 seats. With help of some Independents they claimed support of 57 MLAs in the assembly and staked claim to form the government. The Congress had won 31 seats with INLD and HLP getting one seat each.

A section of the BJP fears that JJP may become more aggressive in Haryana if it is accommodated in Delhi. The BJP’s woes in Delhi stem from internal assessments that defeating the AAP, which swept the 2015 assembly polls with 67 seats, may be easier said than done and parting with key seats for allies in a difficult election may not be good strategy.

Besides the performance in Haryana and Maharashtra, the BJP’s decision not have a pre-poll alliance with ally Sudesh Mahto-led All Jharkhand Students Union (AJSU) in Jharkhand cost the party dear in the state assembly polls. The BJP won only 25 seats, way short of the majority mark in the 80-member House. The Congress which had a pre-poll pact with the Jharkhand Mukti Morcha came to power in the tribal state.

JJP is not the only one troubling the BJP in Delhi. Punjab-based SAD too has been nagging the saffron party to give a few seats to it in the Delhi polls.

The SAD, which had contested 4 seats in the 2015 Delhi assembly polls jointly with the BJP, may be eyeing 8 seats this time, the sources said. The SAD traditionally contests on Hari Nagar, Rajouri Garden, Kalkaji and Sadar Bazaar assembly seats. But wants to contest on Rajinder Nagar, Moti Nagar, Tilak Nagar and Rohtas Nagar seats as well as these areas have between 15 to 35 per cent Sikh votes.

SAD chief Sukhbir Singh Badal discussed the issue recently with Union Home Minister Amit Shah but a final decision is pending in the matter. Both SAD and BJP fought the Haryana polls separately as the saffron party refused to have a pact with the SAD.

After ruling Delhi for 15 years, the Congress was ousted from power in Delhi in 2013 by a debutant AAP which had won 28 seats. The Congress with 8 lawmakers supported the AAP but the government could not last its full tenure and Delhi came under President’s rule. In 2015, the Congress could not open its account in Delhi but since then claims to have recovered a lot of lost ground.

The biggest problem for the Congress high command has been to curb infighting in the Delhi unit and project a face for the chief ministerial post. Last year, Congress interim chief had made veteran Subhash Chopra the new state unit chief and asked him to keep the flock together. Chopra seems to be doing a good job but Sonia Gandhi has asked all senior leaders to fight the assembly polls in order to send a strong message among the voters.

The Congress was about to make BJP import Kirti Azad as the new state unit chief but backed out to avoid a revolt in the Delhi unit. Later, Azad was made the campaign chief for the assembly polls and is now playing a key role in all poll strategy.

Though the Congress refused to have an alliance with the AAP for the 2019 Lok Sabha polls, the party may again join hands with the ruling party post-poll, sources said.

The ruling AAP, which had been blaming the BJP ruled central government for not allowing it to work in Delhi for most part of its tenure, has already declared its candidates on all the 70 seats indicating it was the most confident among the contesting parties.

While the AAP is going to the polls on its performance over the past five years mainly reducing power and water supply bills, improving the lot of government schools, and upgrading infrastructure in slums and congested areas, the Congress is picking holes in the AAP claims and reminding the voters of the work done during the tenure of three term chief minister Sheila Dikshit who passed away last year.

Regularisation of illegal colonies where around 40 lakh people live in Delhi has also been a bone of contention between the AAP and the BJP with each claiming credit for the move. 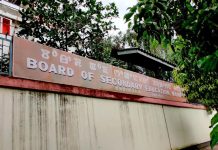