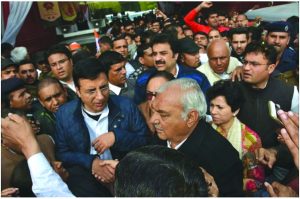 In the Jat heartland, the Jind by-election in Haryana scheduled to be held on Janaury 28 is considered a prestige issue for all the parties in the state, be it the ruling BJP, the main opposition Indian National Lok, the Congress, Indian National Lok Dal (INLD)-BSP alliance and th newly formed Jannayak Janata Party (JJP). The JJP is yet to be allotted the party symbol and therefore its candidate is figting the election as an independent.

The Aam Aadmi Party (AAP) has opted out of the race and therefore will not be contesting the Jind by-poll. The BJP is buoyed by its excellent performance in the recently held municipal corporation elections in five cities where it won all the Mayoral seats, the party leaders say they are very confident of wresting the seat from the INLD.

The by-poll is being held due to the death of the INLD MLA Dr Krishan Midha. A doctor by profession, Midha had won the seat in the year 2009 and then again in 2014. After Dr Midha’s death his son Krishan Midha joined the BJP and the party has reposed faith in him and allotted the ticket to him to cotest the Jind by-poll.

According to Rajiv Jain, Media Adviser to the Haryana Chief Minister Manohar Lal Khattar, the party will win the Jind by-election on the basis of the development works done there and the rest of the state. He said the party is very confident of the win of its candidate Krishan Midha. Krishan Midha is also expected to get the sympathy vote in the name of his father Dr Hari Chand Midha who was a very popular doctor and a social worker.

Two party leaders-Haryana Agriculture minister Om Prakash Dhankar and former MP Sudha Yadav had been made party observers by the BJP national executive, for the sake of Jind by-poll. They visited Jind to hold talks with the party workers to get their feedback before deciding upon the candidate.

Meanwhile the Haryana Congress played a master card by fielding sitting MLA from Kaithal, Randeep Singh Surjewala as the party’s candidate for the Jind by-election.His selection as the party candidate has come as a real surprise because he is already an MLA from Kaithal and according to reports was not too keen on contesting election from Jind although once he defeated former INLD chief Minister Om Prakash Chautala from the Narwana assembly constituency.

But the Congress Party wanted a very strong candidate for the by-poll who could guarantee victory. Vikas, son of independent MLA Jaiprakash was in the lead till the last moment. Even Bhupinder Singh Hooda and HPCC president Ashok Tanwar were earlier agreed on his name. But Rahul Gandhi was not convinced. He wanted a stronger candidate.

Other senior Congress leaders too favoured a very strong candidate who could ensure party’s victory. It was then that the name of Randeep Surjewala was proposed and Rahul Gandhi gave a green signal to him.

One of the bigwigs of the Haryana politics, Randeep Surjewala, the AICC media co-ordinator is one of the most trusted lieutenants of the Congress party and is considered very close to the Gandhi family. He happens to be the trouble shooter for the Congress and is seen as one of the safest and the strongest bets at the moment.

The Congress party does not want to let lose the momentum of victories gained in the recent assembly elections in Madhya Pradesh, Rajasthan and Chatisgarh. The party is a bit down by the municipal corporation results in five cities recently where the ruling BJP swept the poll and Congress did not even contest on party symbol.

This is Randeep Surjewala’s big chance for taking over leadership from former Chief Minister Bhupinder Singh Hooda in case he gets further embroiled in court cases in the election year and fails to contest poll.

One of the tallest Jat leaders from the Congress, Surjewala, in the last one year has remained in prominence and held public rallies almost once a week.

By reposing faith in Surjewala the Congress is testing his popularity in the state and preparing him for further battles ahead against the BJP and other parties.

The Congress feels that a victory in the Jind by-elections will be beneficial in two ways. First it will boost the morale of the party workers before the Lok Sabha elections. Secondly it will give a clear message to the ruling BJP in Haryana that it cannot take victory for granted.

Meanwhile the Jannayak Janta Party (JJP), which was launched last month after a split in the main opposition INLD, announced its youth leader Digvijay Singh Chautala to be the party’s candidate for the Jind by-election. The INLD has fielded Umedh Singh Redhu for the poll. Incidentally the Jind by-election would be an opportunity for both the INLD and the JJP to show their strength ahead of the Lok Saba and Vidhan sAbha elections later this year. This would also provide an opportunity to the workers of both the parties to settle the dilemma which party they want to remain with in future. The performance in the by-election will also set the future course of direction for both the parties.

The by-election would be also be an opportunity for both the INLD and the JJP to show their strength in the state politics, specially against each other in particular. They also say the Jind poll would help INLD workers and supporters to settle the dilemma about whom to vote for — the INLD or the JJP. Vote percentage for the two parties will therefore be very crucial.