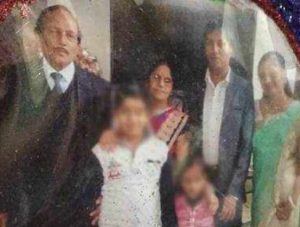 Six members of a family had committed suicide in Jharkhand’s Hazaribagh district on Saturday. A suicide note has been recovered from the scene, which mentions that the family was under a lot of stress due to debts and financial crises.

According to Police, the victims were Naresh Maheswari, 40, his father Mahavir Maheshwari, 70, mother Kiran Maheshwari, 65, his wife Priti Agarwal, 38 and two of their children Aman, 8 and Anjali, 6. The Victim Naresh Maheswari killed himself by jumping off the roof of his apartment while his parents and wife hung themselves from ceiling fans and their children’s throat were slit.

The reason behind their suicide was a lot of pressure of debts and huge loss in the business, stated in their suicide note, which was found by the police.

However police said, “We are still investigating the case and Forensic team is collecting samples to ascertain the cause of death.”

This incident has come after 11 members of a family were found dead in North Delhi’s Burari on June 30.