Abdul Rauf is among 44 members of banned groups that have been detained.

The move came after Pakistan had assured the international community that it will take strict action against terror.

Mufti Abdur Rauf and Hammad Azhar are among those detained during the crackdown, Minister of State for Interior Shehryar Khan Afridi said at a press conference.

The minister said the action would be taken against all the proscribed organizations but denied that the action was not done under pressure from India but was based on the decision taken by the National Action Plan committee.

The minister further said the crackdown will continue for two weeks and actions against the arrested members will be taken on the basis of evidence.

The Financial Action Task Force (FATF) has put Pakistan on a tight deadline to stop terror funding on its soil. If it fails to act on its promises made to the FATF, Pakistan, which is already on the ‘grey’ list might find itself being blacklisted. 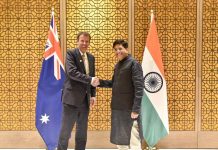