An earthquake of magnitude 6.7 has hit Japan’s northern island of Hokkaido on Thursday, causing huge landslides that engulfed houses.

According to the Japan Meteorological Agency (JMA), the major temblor hit Hokkaido prefecture at 3.08 a.m. (Japan time) with the epicentre at a latitude of 42.7 degrees north and a longitude of 142.0 degrees east, and at depth of 40 kilometers below southern Hokkaido.

The earthquake was logged between 6 and 7 on the Japanese seismic intensity scale in the southeast of Sapporo, the capital of Hokkaido.

“There might be a slight sea-level change in Japan’s coastal areas as a result of the magnitude 6.7 quake”, said Japan Meteorological Agency (JMA).

Several residents were reported trapped among others injured as a result of the quake.

Many incidents of house collapses and landslides have also been reported.

Rescue work is under way for those possibly buried under the houses, according to local officials. 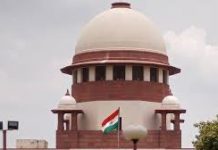