Two terrorists were killed on Monday in an encounter between security forces and terrorists in Jammu and Kashmir’s Kulgam.

The gunfight erupted when security forces launched a cordon and search operation at Hanjipora area of Kulgam following an input about presence of terrorists there.

As the cordon was tightened, hiding terrorists opened fire triggering an encounter in which two terrorists were killed. 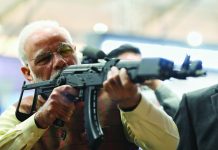