Two terrorists were killed by the security forces on Thursday morning in an encounter in Khrew area of Pulwama district in Jammu and Kashmir.

The state police and security forces in a joint operation had launched a cordon and search operation in Sharshali area of Khrew in Awantipora during wee hours after receiving specific inputs about the presence of militants in the area.

“As the searches were going on, the search party was fired upon by the militants. The fire was retaliated, triggering a gunfight in which two militants were killed,” police said.

Arms and ammunition were recovered from the slain terrorists. The police stated that no collateral damage took place during the encounter.

A case has been registered by police.

On Wednesday, Lashkar-e-Taiba (LeT) commander, Naveed Jatt, was killed in a gunfight in Jammu and Kashmir’s Budgam district. Jatt was wanted for the murder of senior journalist Shujaat Bukhari. 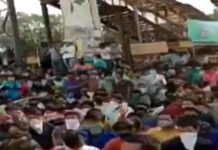