Two militants were killed and three soldiers injured on Wednesday in a gunfight between security forces and terrorists in Jammu and Kashmir’s Badgam district, police said.

Jammu and Kashmir police had earlier tweeted, “exchange of fire between security forces & #terrorists at Kuthpora #Budgam. Information is preliminary in nature.”

Mobile and internet service have been suspended in the area.

On Tuesday, three militants were killed and an army soldier was martyred in two separate encounters in Jammu and Kashmir’s Tral and Kulgam district. 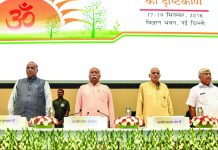