Terrorists on Friday carried out two grenade attacks on security forces in Jammu and Kashmir, including one in the Lal Chowk area of the city, police said.

According to an official, the grenade exploded on the roadside adding no one was hurt in the attack.

In a separate incident, terrorists lobbed a grenade at security forces in Shopian district of south Kashmir. No loss of life or injury has been reported yet.

Jammu and Kashmir police tweeted, “Two incidents of #grenade attack by #terrorists; one in #Srinagar & other in #Shopian. #Police is at the spot. Investigation in both incidents is going on. No loss of life or property reported.”

Security forces were rushed to both the areas and search operations have been launched to nab the attackers. 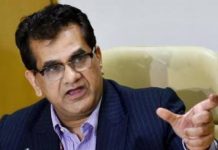