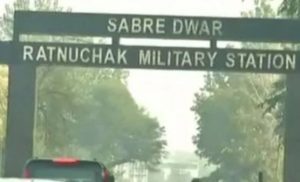 As per the sources, an army guard noticed suspicious movement at around 2 am and spotted two suspects approaching the military station.

No one was injured in the brief gun battle; however the suspects managed to flee the spot, the sources said.

Security forces have launched a search operation to track down the suspects; meanwhile the whole area bordering Samba district was sealed.