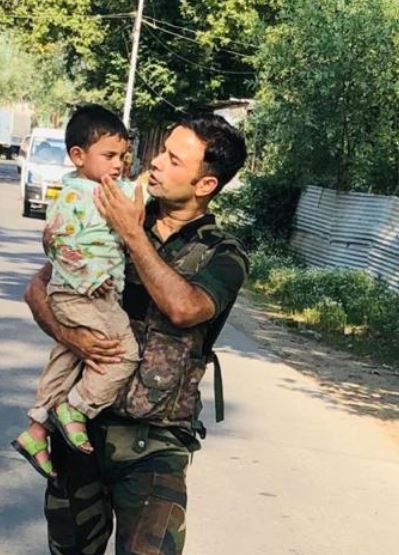 The police also tweeted a photo of the child being carried to safety by a policeman.

“JKP #rescued a three years old boy from getting hit by bullets during #terrorist #attack in #Sopore,” Kashmir Police tweeted.

According to the sources, the child was travelling in a car with his grandfather when it was hit by bullets.

One Central Reserve Police Force (CRPF) jawan and a civilian were killed today morning after terrorists opened fire at a patrol party in Sopore.

Terrorists attacked a naka party at Model town in Sopore at around 7.30 am, injuring at least four CPRF personnel and a civilian. All were rushed to a hospital for further treatment but a CRPF jawan and a civilian succumbed to their injuries.

Kashmir Zone Police in a tweet said, “We #lost one CRPF personnel and one civilian in a #terrorist #attack at #Sopore. Three CRPF personnel also got injured in the attack. Area has been cordoned off and search is on to nab the #terrorists.”

The area has been cordoned off and the search operation has been launched.