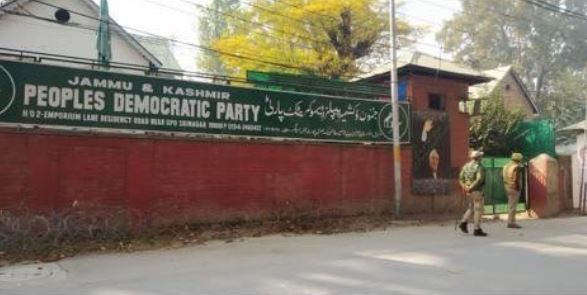 People’s Democratic Party (PDP) leaders were detained by Jammu and Kashmir police for staging a protest in Srinagar on Thursday against the new land laws.

PDP’s chief and former Chief Minister Mehbooba Mufti questioned the Jammu and Kashmir administration for thwarting the peaceful protest in Srinagar and allowing a similar protest in Jammu.

“PDP office in Srinagar sealed by J&K admin & workers arrested for organising a peaceful protest. A similar protest was allowed in Jammu so why was it thwarted here? Is this your definition of ‘normalcy’ thats being showcased in the world?” Mehbooba asked.

“Many others like @TahirsyeedK, Yasin Bhat & Hameed Kohsheen also arrested. A government desperate to curb any kind of dissent & ready to crush its own people but all the machismo disappears when it comes to fighting China at the LAC,” Mufti added.

PDP spokesman Suhail Bukhari said, “We are protesting against the black laws of the black day. Swords are kept hanging over our heads and a barrel is pointed towards our heads, as there is no space left to express our opinion.”