One terrorist was killed on late Thursday night in a joint operation in Jammu and Kashmir’s Handwara district.

According to the reports the incident took place after security forces launched an operation following intelligence inputs about the presence of militants in the district.

On Thursday, two terrorists were killed in an encounter at Zagoo Arizal area in Budgam district of Jammu and Kashmir.

Police had also recovered arms and ammunition and other incriminating materials from the area. 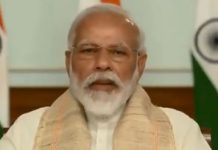