Jammu and Kashmir Police on Sunday said that a youth who went missing last month from his home in Tangmarg area of north Kashmir’s Baramulla district, was found murdered, while two suspects has been arrested.

Police began an investigation following a written complaint filed by Mehrajuddin Teli’s father on August 26 saying that his son had gone missing from Tangmarg area. Efforts were made to locate the missing person.

While interrogation, the two suspects – Irshad Ahmed Wani and Imtiyaz Ahmed Wani both residents of village Rishipora Khaipora Bala admitted that they murdered the missing person Mehrajuddin Teli on the day he went missing and later buried his body few kilometres away from the area.

Later, Teli’s body was exhumed by a team of medical and forensic experts in presence of a Magistrate.

Further investigation into the matter is going on. 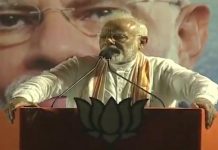