A militant was gunned down on Saturday in a gunfight with the security forces in Jammu and Kashmir’s Pulwama district.

The security forces including troops of Rashtriya Rifles (RR), Central Reserve Police Force (CRPF) and state police launched a cordon and search operation after receiving specific inputs about the presence of militants in Babgund area of Pulwama.

According to the sources, Militants hiding in one of the residential houses fired upon the forces, triggering a gunfight, adding that one militant was killed during the exchange of fire.

The slain terrorist was identified as Sabir Ahmed Dar.

Police have also recovered arms and ammunitions from the slain terrorist.

Meanwhile, a police official said that curfew has been imposed in Pulwama town “as a precautionary measure” to prevent protests. 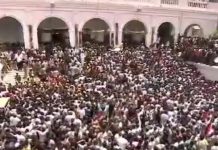 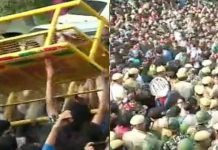