Two terrorists were killed and a soldier was martyred on Tuesday morning in an encounter in Jammu & Kashmir’s Kulgam district.

Following specific inputs about presence of militants, security forces launched a search and cordon operation in Kulgam’s Redwani area. However, exchange of fire began when terrorists fired upon security forces.

In another incident, a gun battle started between security forces and terrorists at Hafoo area of Tral in Pulwama district of Jammu and Kashmir.

The entire area has been cordoned off. 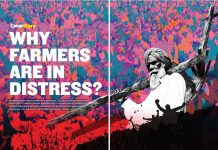