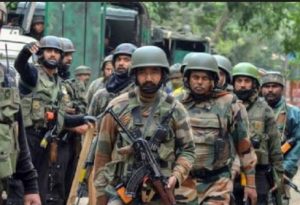 The Centre airlifted an additional hundred companies of paramilitary forces to the state on an urgent basis to boost security build up after yesterday’s crackdown resulted in separatist Yasin Malik’s arrest.

Malik’s detention came ahead of the hearing on Article 35A in the top Court which is likely to take place on Monday.

According to the sources, more separatist leaders may be rounded up in coming days.

After notice from the Home Ministry late on Friday night, 100 additional companies of paramilitary soldiers were airlifted to Srinagar to support the Jammu and Kashmir Police.

The raids were conducted in south, central and north Kashmir districts.

“In the past 24 hours, Hurriyat leaders & workers of Jamaat organisation have been arrested. Fail to understand such an arbitrary move which only precipitate matters in J&K. Under what legal grounds are their arrests justified? You can imprison a person but not his ideas,” Mehboob tweeted.

There has been a state of emergency in the Valley after the Pulwama terror attack in which at least 40 CRPF personnel were killed and many injured-on February 14 in one of the deadliest terror strikes in Jammu and Kashmir’s Pulwama district.

In the aftermath of the Pulwma terror attack, the government also withdrew the security cover of numerous separatists in Kashmir.