At least seven people were killed and three others injured in a road accident in Sujandhar village of Jammu and Kashmir on Thursday.

The accident took place in Reasi district, about 210 km south of Srinagar city after the vehicle they were travelling in lost its balance and skidded off the road.

Police said, “at least seven people were killed and three others injured, when a private car headed to Sujandhar village went out of the driver’s control and plunged into a gorge late on Thursday night.”

Rescue operation was launched and all injured were rushed to the hospital for further treatment. 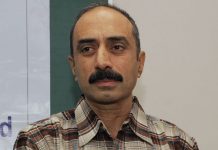