Three terrorists were gunned down on Sunday in an encounter with the security forces in Mujgund area of Srinagar in Jammu and Kashmir.

Five security personnel were also injured in the gunfight which began on Saturday.

The gunfight resumed on Sunday morning and the operation was to flush out the terrorists , the officer said.

“While the firing was stopped for the night, the forces had cordoned off the area to stop the terrorists from escaping,” he added.

Mobile internet services have also been suspended in Srinagar following the encounter.

The gunfight started after the terrorists fired upon security forces on Saturday when they were conducting searches, on getting specific inputs about the presence of some terrorists in the area. 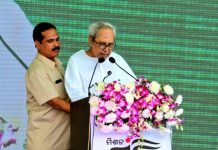