At least 10 people were injured on Saturday in a grenade attack by militants outside the Deputy Commissioner’s (DC) office in Anantnag district of south Kashmir, a police official said.

Among the injured were traffic police personnel and a journalist.

According to the official, the grenade missed the target and exploded on the roadside. The attack sparked panic among the people.

The area was cordoned off by security forces and a search operation has been launched to nab the militants. 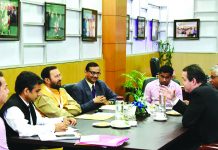