One Indo Tibetan Border Police (ITBP) trooper was killed and 34 others were injured on Monday when a bus they were traveling in met with an accident on Jammu-Srinagar National Highway, police said.

Reports said that the bus skidded off the road near Khuni Nallah in Ramban district and rolled down into a deep gorge.

All ITBP men were returning from Srinagar and were on their way to Jammu.

According to an officer, trees prevented the bus from falling further down in the gorge.

“One ITBP soldier died in the accident while 34 personnel were injured who were rushed to district hospital Ramban for treatment,” officer added. 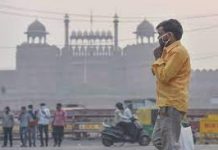