A Central Reserve Police Force (CRPF) jawan and two terrorists were killed in a gun battle on Wednesday outside Srinagar, police said.

According to the officials, the encounter began after the terrorists opened fire on security forces at check-post in Lawaypora.

Kashmir Zone Police in a tweet said, “#Terrorists attacked a joint naka of Police & security forces at #Lawaypora. In the exchange of fire 02 terrorists were killed. One SF jawan attained #martyrdom. Further details shall follow.” 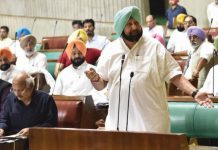