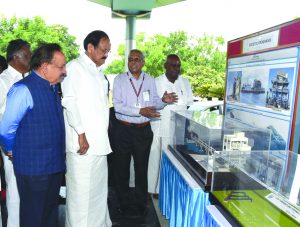 While the government has reacted to Moody’s rating for India from “stable” to “negative” saying that India continues to be among the fastest growing major economies in the world, it is the Blue economy that is giving necessary boost to economy.

Little doubt that the International Monetary Fund in its latest World Economic Outlook has stated that Indian Economy is set to grow at 6.1 per cent in 2019, picking up to 7 per cent in 2020.  The Government has undertaken series of financial sector and other reforms to strengthen the economy as a whole.

The Government of India has also proactively taken policy decisions in response to the global slowdown. These measures would lead to a positive outlook on India and would attract capital flows and stimulate investments. The fundamentals of the economy remain quite robust with inflation under check and bond yields low. India continues to offer strong prospects of growth in near and medium term.

How much significance government attaches to Blue economy would be clear from the fact that Vice President M. Venkaiah Naidu has urged scientists to come up with innovative solutions to conserve water resources and tackle problems like climate change and pollution.

Inaugurating the silver jubilee celebrations of National Institute of Ocean Technology (NIOT) on November 8, 2019, the Vice President said technology was needed for protection of coastal areas from negative impacts of climate change and for development of blue coastal infrastructure for the benefit of society.  While lauding NIOT for developing technologies like desalination plant to convert sea water into portable water, he said there was a need to ensure that such technologies were cost effective.

Talking about the importance of Blue economy in the overall progress of the nation, the Vice President expressed happiness that NIOT was working on six priority pillars of blue economy, including Fisheries and Aquaculture, Renewable Ocean Energy, Seaports and Shipping; Offshore Hydrocarbons, Seabed Minerals, and Marine Biotechnology.  The Vice President pointed out that blue economy includes intangible economic benefits such as carbon sequestration, coastal protection, cultural values and biodiversity.

The Vice President conveyed his best wishes to the Ministry of Earth Sciences (MoES) and NIOT for the success of their upcoming project — Samudrayaan, which envisages sending aquanauts to ocean depths with their manned submersible.

Naidu declared that after assuming the office of Vice President of India, he has made it a mission to visit various scientific institutions across the country to understand first-hand the research being conducted by them. In this context, he recalled his visit to INCOIS and the National Tsunami Warning Centre in Hyderabad.

The Vice President said that he was extremely impressed with the work being carried out by scientists in areas of ocean observation and information and advisory services and making the coastal states Tsunami-ready. The Vice President also launched the Coastal Flood Warning System app for Chennai (CFLOWS- CHENNAI) developed by the NIOT. He also released a commemorative postal stamp brought out on the occasion.

The Union Minister for Science and Technology and Earth Sciences Dr Harsh Vardhan observed that the Ministry of S&T is in consultation with the NITI Aayog to launch the National Mission on Desalination which can help us solve the growing problem of water that the world is facing today.

He commented “I have witnessed several key projects of NIOT especially the desalination project for providing water to the Lakshadweep Island community and the Ocean Thermal Energy Conversion project in Kavaratti for power generation for desalination.”

Dr Harsh Vardhan said he also dedicated to the nation the NIOT’s Polar Remotely Operable Vehicle (ROV), which was used in the search operations of the sunken IAF AN-32 aircraft. “The ROV catapulted India to the elite club of nations like the USA, Japan, France, Germany & Korea with successful development & usage of 6,000 m deep Remotely Operated Vehicle,” said Dr Harsh Vardhan. The ROV has been transferred to the Indian industry such as L&T Heavy Industries, Mumbai & BEL, Bangalore, he added.

He congratulated the NIOT for transferring some of their technologies like robo-coastal observer, ocean drifter and expandable CTD to industries indicating the commercial relevance and industrial utility of their research. “The NIOT has  already initiated working towards several long term objectives like creating the offshore infrastructure to make offshore wind energy more viable & effective, indigenization of marine sensors,” he said.

He added that IMD is providing precise weather forecast with the result that while in 2015 about one crore farmers were being provided with weather alerts and now more than four crore farmers are benefitted by it. “In 2004 the Indian Ocean tsunami caused widespread loss of life and damage, but now we have among the world’s best tsunami warning systems,” he added.

The NIOT was established in November 1993 as an autonomous society under the Ministry of Earth Sciences, Government of India by the then Department of Ocean Development. During this  eriod, NIOT has established itself as one of the premier institutes in the world, working on various ocean technologies. During this period, NIOT has demonstrated several technologies for societal applications such as Desalination plants, Data and Tsunami Buoy Network in Indian waters for collecting real time oceanic data, sea cage culturing in open sea, shore protection. NIOT is also working on continuous expansion to take benefits of these technologies to the doorsteps of common citizens of country.

NIOT has to its credit many technologies which have been transferred to Indian industry as part of “Make in India” programme of Govt. of India, like the floating drifter, robo coastal observer, remotely operable vehicle etc.

The infrastructure at NIOT includes hyperbaric chamber for testing of underwater systems and state-of-the-art research ships. NIOT will be the nodal institution for implementing the proposed Deep Ocean Mission, which encompasses all the areas of Ocean technology like development of manned submersible, offshore large scale desalination, Ocean Thermal Energy Conversion (OTEC), extensive survey of the oceans, acquisition of new ships etc.