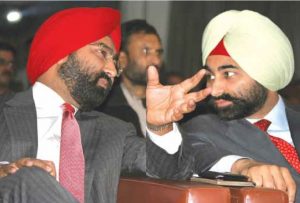 While the financial authorities, including the Serious Fraud Investigations Office (SFIO), were probing the irregularities in Fortis and the Singh brothers who owe $500 million to Daiichi Sankyo over fraud allegations related to the 2008 sale of Ranbaxy Laboratories, the family feud was never open in public domain.

In fact, it is after months of closed door infighting, which is a key feature of many big business houses, the feu between well-known Singh brothers of the erstwhile Ranbaxy group has come out into the open. The younger sibling Shivinder has filed a case of “oppression” against his elder brother Malvinder Singh and family friend Sunil Godhwani. he younger brother has charged the two with systematically undermining the interests of Fortis Healthcare Limited.

In his 43-page petition, Shivinder alleged that signature of his wife Aditi Singh, who had held the post of managing director of RHC Holdings, was forged. “There are also instances of the petitioner No 3 (Aditi Singh) being shown as present for a board meeting when she was in fact abroad.

Few years down the line nobody close to the family could believe that the corporate dealings would take such a turn. For the record when the Fortis deal was entered, it was touted as one of the biggest acquisitions in the Indian patient-care industry and the 4,500-crore Fortis-IHH deal could intensify competitive intensity in the space. The deal anticipated that postexecution, the IHH-Fortis group of hospitals will be among the biggest in the country, competing directly with some of the large listed hospital chains. For instance, the Apollo has a total capacity of 10,000 beds, including those at its partner networks. Max Healthcare has a network of 14 hospitals, with a combined capacity of 2,500 beds. By contrast, in this deal, IHH would have got access to a network of 34 hospitals of Fortis in India and in international markets.

Together, these facilities would have a capacity of more than 4,600 beds. Although IHH has a significant presence in rest of Asia with hospitals in nine countries and about 10,000 beds, its India footprint is rather modest. Currently, IHH is present in five Indian cities with a network of seven hospitals and less than 1,600 beds in operation.

Nobody could visualise that the matter would reach such a passé. The threepage document from Shivinder Singh said, “I have filed a case against Malvinder and Sunil Godhwani in National Company Law Tribunal for oppression and mismanagement of RHC Holding, Religare and Fortis.”

Singh said, “I mutely watched the organisation I founded come to a point where it was publicly auctioned; where my family and myself have been stripped of our legacy, our finances and my personal credibility.” Oppression charge In a release sent to media houses, Shivinder Singh said that “for two decades he and his brother have been synonymous with one another”. In the petition filed before the New Delhibench of the National Company Law Tribunal (NCLT), the younger of the Singh siblings, who were synonymous with each other for decades, sued Malvinder for “oppression and mismanagement” of their companies. The petition charged Malvinder, 45, and former chairman of Religare Enterprises Limited Sunil Godhwani of putting the company in a debt trap and acting prejudicially to the interest of its creditors and shareholders. It alleged that Malvinder “forged the signatures” of Aditi Singh, Shivinder’s wife, in the documents of RHC Holdings Private Limited, which along with Oscar Investments Limited jointly owned financial services firm Religare Enterprises Ltd. and hospital chain Fortis Healthcare Limited.

The petition goes on to charge that Malvinder and Godhwani “used their respective positions to perpetrate or cause others to perpetrate illegal financial transactions and various acts of mismanagement by and through RHC, leading to massive losses to RHC and its subsidiaries, and a depletion of the wealth.”

The petition filed through law firm RRG & Associates also asked NCLT to direct Malvinder “to return the funds unlawfully taken from Fortis Healthcare and Religare Enterprises”. Shivinder also requested NCLT to direct Malvinder and Godhwani “not to alienate any interest in any asset anywhere so that recoveries can be effected against them”. While seeking interim relief, Shivinder has sought an injunction “to maintain status quo as on filing of the present Petition” over the shareholding of RHC Holdings tillthe time of disposal of the matter. He also sought “status quo to be maintained on board of directors” of RHC Holdings in his petition filed under Sections 241, 241 and 244 of the Companies Act, 2013.

In his 43-page petition, Shivinder alleged that signature of his wife Aditi Singh, who had held the post of managing director of RHC Holdings, was forged. “There are also instances o the petitioner No 3 (Aditi Singh) being shown as present for a board meeting when she was in fact abroad. For the record, the RHC Holding Pvt Ltd is a a non-banking financial company owned by the families of Singh brothers. Currently, Malvinder Singh is the managing director of the firm.

Ghost of other deals

It seems that it is not only Fortis ghost that refuses to leave the two brothers. Daiichi is pressing hard to get 3,500 crore from Singh brothers while Securities and Exchange Board of India (SEBI) is conducting a forensic audit of Fortis and Religare.

Earlier in the year 2018, Siguler Guff & Company filed a case in Delhi High Court accusing Singh brothers of siphoning funds from Religare. The Delhi High Court upheld the Singapore arbitration tribunal’s decision to fine the brothers for around 3,500 crore for “concealing and misrepresenting” facts from Daiichi Sankyo.