But what about the lakhs of people who would be caught in the crossfire of such a conflict?
They are already caught. They are sometimes, against their will, under the tutelage of those who don’t constitute the republic of India. And the armed forces will continue to be predatory without being effective. So there is no security of life for them. And the Naxalites must understand that if they are willing to return to the mainstream, India is assimilative. But if they implacably oppose to the duly constituted state, you have act in a particular way. And again, it’s not punitive action versus development. It’s not either-or, it’s sequential.
A lot of the state’s excesses, in India at least, happen due to mid- and low-level government officials. There is an idealism you speak of, which should exist in our politicians. But there is the rest of the state apparatus, which mostly runs with self-interest as the primary motivation. How do you change that and instill patriotism? Would you make this book compulsory reading?
I do not believe in individual proclivity. I believe individuals behave as per certain norms when there systemic checks to their criminal aberration. That is why in the case of bureaucratic excess of rapacious corruption, I prescribe system checks to change it. That is why I laud the Right to Public Services Act, which has been functioning in Bihar and Madhya Pradesh, where the erring official who does not deliver a service in time is fined Rs 500 for every day of delay. As far as corruption goes, Indians as a whole accept a certain moral relativism, where they will criticise corruption in high places when they pay happily for a chalaan not to be registered against them. I prescribe, therefore, an architecture against corruption not depending merely on the silver bullet of one Lokpal. An example is electoral reform, which is the key. Secondly, I propose the expansion of the neutral intervention of technology in as many areas as where an individual interfaces with the state. It just overarches the human intermediary. You can book an airline ticket online; you don’t need a tout.
This book coincides with your entry into electoral politics. Why did you choose the JD(U) to join and do you think that the Nitish Kumar government has implemented what you have written in this book?
I’m an admirer of Nitish Kumar primarily for three reasons: clean politics, good governance and a secular vision. I believe these are needed for a new paradigm of leadership in our country today. Certainly, there are aspects of this book, which I have seen either as work in progress or implemented in Bihar. A notable example is the Right to Public Services Act. I believe strongly that there is substitute, for instance, to boosting agricultural productivity in order to tackle poverty. Bihar has had an increase rice production increase by 29 percent in one year. The ability to implement exemplary and deterrent punishment against corruption is again something I have seen implemented in Bihar, including the seizure to properties of those who are corrupt. I’m not saying it is in every respect ideal, a lot more needs to be done. But there are many aspects which I admire. 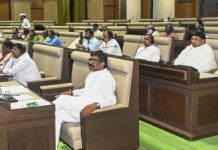