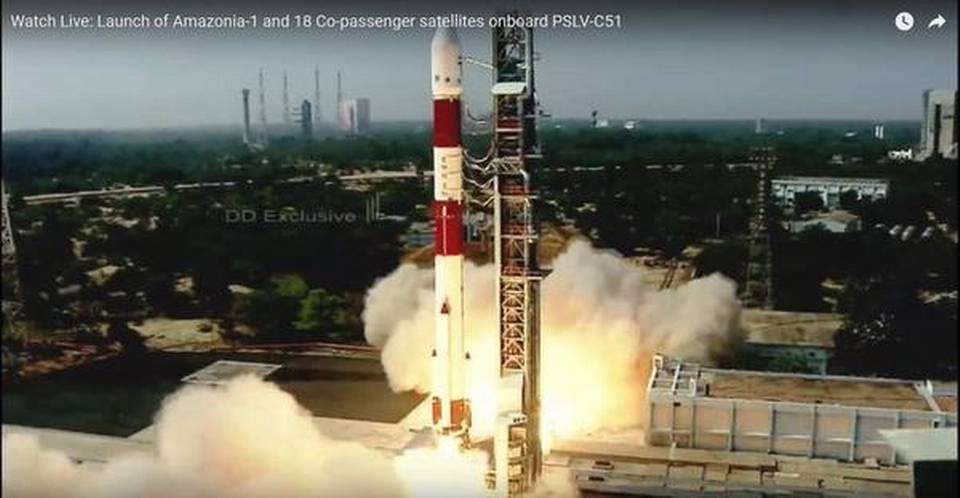 Space agency ISRO, in its first mission of the year, successfully launched Amazonia-1 of Brazil and 18 other satellites from the spaceport in Sriharikota, Andhra Pradesh.

The Polar Satellite Launch Vehicle PSLV-C51 lifted off at around 10.24 am from the first launch pad of the Satish Dhawan Space Centre (SHAR) and first injected into orbit primary payload Amazonia-1 about 17 minutes later, media reports said.

After a gap of over one-and-half hours, the co-passenger satellites, including one from Chennai- based Space Kidz India (SKI), which is engraved with a picture of Prime Minister Narendra Modi, were launched subsequently one after another in the space of ten minutes in a textbook launch, the reports added.

According to SKI, the picture of Modi has been engraved on the top panel of the spacecraft to solidarity and gratitude for his Atma Nirbhar initiative and space sector privatisation.

A beaming Indian Space Research Organisation (ISRO) Chairman K Sivan announced the mission was successful and all 19 satellites were launched in precise orbits.

“Today is a very great day for the entire ISRO team and the PSLV-C51 is a special mission for India. Let me congratulate and compliment the team ISRO for achieving the precise injection of AMAZONIA-1 and 18 other satellites,” he was quoted as saying.

PSLV-C51 is the first dedicated commercial mission of NewSpace India Limited (NSIL), ISRO’s commercial arm, and the launch was watched among others by Brazilian government officials at the mission control centre here, over 100 kms from Chennai.

The 18 co-passenger satellites placed in the orbit are — four from ISRO’s Indian National Space Promotion and Authorisation Centre (three UNITY Sats from consortium of three Indian academic institutes and the SD-SAT from SKI) and 14 from NSIL.

The 637-kg Amazonia-1 which became the first Brazilian satellite to be launched from India is an optical earth observation satellite of National Institute for Space Research (INPE).

It is intented for providing remote sensing data to users for monitoring deforestation in the Amazon region and analysis of diversified agriculture across the Brazilian territory.

Earlier, at the end of the 25.5 hour countdown, the four-stage 44.4 metre tall PSLV, a workhorse launch vehicle of ISRO in its 53rd mission, soared into clear sky and every stage performed as programmed, ISRO said.