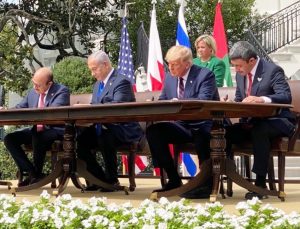 Israel, United Arab Emirates (UAE) and Bahrain on Tuesday signed the US-brokered peace agreements at a ceremony at White House.

Trump said, “HISTORIC day for PEACE in the Middle East — I am welcoming leaders from Israel, the United Arab Emirates, and the Kingdom of Bahrain to the White House to sign landmark deals that no one thought was possible. MORE countries to follow!”