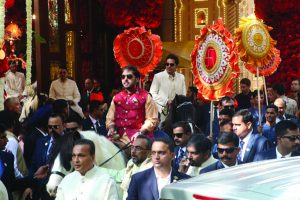 Billionaire industrialist Mukesh Ambani had left no stone unturned to make his daughter Isha Ambani’s marriage a grand success. Isha Ambani who married, Industrialist Ajay Piramal’s son Anand Piramal has desired that her marriage should take place in a traditional Indian style for which animals were used. It was not a  difficult task for her Papa, Mukesh opened his cash boxes for making the marriage a memorable event of her life. So, Ambani sought prior permission from the Animal Welfare Board of India to use animals in various ceremonies.

SP Gupta, a  crusader for animal rights and cow service and Chairman of Animal Welfare Board of India received a  request on behalf of Industrialist Mukesh Ambani for the use of animals. Gupta granted the permission but with the rider that strict instructions of the Animal Welfare Board will be followed and no cruelty on animals will be done while using them in various ceremonies.  Animals like elephants, camels and birds were used during various ceremonies during a pre-wedding function at Udaipur and at marriage ceremonies at Mumbai. Everybody who is somebody in corridors of power, be the top industrialists, corporate bosses, Bollywood stars and politicians cutting across party lines had attended the pre-wedding and wedding ceremonies held at Udaipur and Mumbai. Gupta had directed that inspection committee constituted by the Board had the right to inspect the events.

AWBI is statutory body working under the aegis of Ministry of Environment, Forest and Climate change to ensure that no cruelty is done to animals. SP Gupta constituted inspection panel comprising the district collector, district animal husbandry officer and Atul M Jain, Honorary Animal Welfare of the Board to insect the events in which animals were to be used in Mumbai in wedding ceremonies. A similar committee was also constituted for Udaipur pre-wedding functions. Ten elephants, fifteen horses, twelve camels, six Macaws. Five Cockatoos, grey parrots and blue rock pigeons were used.

Jain told Tehelka, “But to speak of causing cruelty to the animals used in the various ceremonies, the animals were taken care more than the man by Mukesh Ambani and his son Anand Ambani who had ensured that animals are treated well. Ambulances and a team of veterinary doctors were present during the ceremonies.” 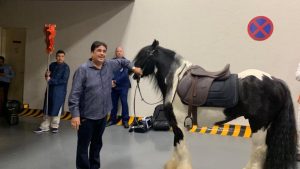 Jain said that in his life he had never seen such a rich man taking so much care of the animals adding that Isha Ambani and Nita Ambani were thrilled seeing various animals in the ceremonies.

Gupta told Tehelka, “I am happy that inspection committee has reported positively about the use of animals during the various ceremonies. Normally people use animals in various social functions without permission but here noted industrialist Ambani not only got permission from the Animal Welfare Board of India as a law abiding citizen but had personally ensured that animals were treated nicely adding that Mukesh Ambani had set up an example.”

Gupta said that others should follow the example set up by Ambani. Gupta said that sitting at Board’s office he was in touch with the members of the inspection committee and was getting a minute to minute report that Board’s instructions are being followed strictly.

Gupta is an animal lover and along with his wife, Shashi is running a Gowshala in Mewat area of Haryana. Considering his love for animals, the government has recently appointed as Chairman of the Animal Welfare Board of India the job he is enjoying.