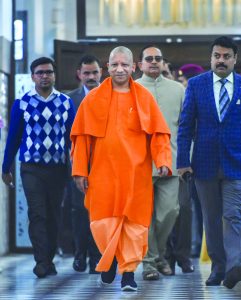 When Yogi Adityanath government took over as chief minister of Uttar Pradesh, he sent a direct or indirect message to the Muslims that they will have to do with much less! In every sense of the term — right from employment, to public space… to much less to eat and survive on, and of course, very little to celebrate!

Tell me who can fight the police machinery? One can watch on hopelessly as innocents are rounded up from Muslim mohallas. And if lawyers are arranged to move bail applications they too are arrested and thrown in those hell holes called prisons! One such lawyer is Mohamed Faisal who is a practicing lawyer at Kota Bar Association and who went to Shamli (Uttar Pradesh) on the call/request of the local people to provide legal aid to the victims affected by the police in the anti – CAA protests.

Muslims have realized that if they have to survive under the Hindutva rulers they will have to keep all shut — that is, survive as second or third class citizens. But even here there is no relief as I know for a fact that police men can barge into any Muslim home and beat up boys, misbehave with the women, extract and loot and ransack! To top it all there is no one out there to even hear their cries for the rulers and hand in glove with the police machinery!

In fact, the absolutely fascist-sadistic streak to it all is — the rulers want the dying community to pay for the firearms used in those barbaric unleashes! ‘Seizure of properties’ is the ultimate threat that this government is unleashing on a hapless population. As though making sure that the Muslims are overnight ripped off their ancestral homes and lands and their very identity.

In fact, soon after he came to power Yogi Adityanath’s government in Uttar Pradesh had also scrapped two significant public holidays: Jamat-ul-Alvida (last Friday of the month of Ramazan) and also that of Eid Milad-ul-Nabi (birthday of Prophet Mohammad).In fact, as one goes through the list of public holidays scrapped by this UP government it comes across as shocking that they have decided to show their communal bias against the Muslims once again. And once you read the details of the scrapped holidays, you’d realize the political establishment has been unduly harsh on the Muslim community by banning holidays of great significance to the community.

Let me add that there’s no ‘happy new year’ for me! In fact, for the last few years I had stopped celebrating new year or taking part in any other festivities for I could more than sense and see the eerie build ups.

Divisive tactics together with marked targeted-killings have been on the rise for the last few years yet all quiet we been sitting! Signs of another round of Partitioning out there yet we don’t seem unduly perturbed. Why! It’s time to get out all the possible literature and works on the Partition, to try focus on the havoc it had heaped in this subcontinent.

This time I am sitting in mourning. Deeply worried and more than apprehensive for my country, my countrymen and my community. I cannot overlook the fact that these rulers are fascists who can go to any extent in their killing and imprisoning spree to unsettle the ‘other’- the Indian Muslim.