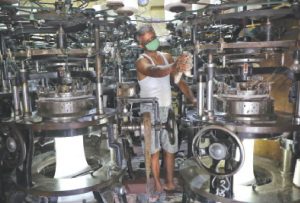 Rahul Gandhi has been betting big in warning the Modi government over a sliding economy through his consistent attacks but the centre does not seem to be listening. Rahul’s fears expressed in February that Covid-19 could unleash a kind of tsunami on the Indian economy and bring unimaginable pain to millions in the following months have unfortunately turned out be true.

Since the nationwide lock down started March 25, businesses have been shut, manufacturing is down, jobs have been lost, people have no income, pay cuts are in, several key sectors are bleeding, the pandemic is galloping and yet there are not many signs of an economic recovery on the horizon.

“Small & medium enterprises stand destroyed. Large companies are under severe stress. Banks are in distress. I stated months ago that an economic tsunami was coming and was ridiculed by BJP and the Media for warning the country about the truth,” Rahul tweeted on July 8.

“Today we have the highest unemployment in 45 years and India’s sovereign rating is down in the past 22 years,” Congress spokesperson Gaurav Vallabh said.

On the contrary, the government sounds optimistic saying green shoots of economic recovery are showing maybe because it is politically correct to do so.

Besides Rahul, who is clearly behind the party’s strategy to highlight the economy issue, a battery of senior leaders, including former Prime Minister Manmohan Singh and former finance minister P Chidambaram and several party spokespersons too have been expressing concern over the slowing down of India’s growth story.

Congress leaders believe the former party chief is harping on the economy issue to target the Modi government as it is a pressing issue for a national opposition party to flag.

Secondly, economy is an issue that has a strong resonance with common people whose lives are directly impacted if the economic growth turns negative for extended periods, they said.

However, it is also a fact that the Congress has done little to take the economy issue to the people through mass movements other than addressing press conferences and raising it on social media. Here, a depleted party organization across states besides movement restrictions due to the pandemic, are reasons why the Congress’ state units have not been able to launch massive protests over an issue which can easily mobilize people and give credibility to its leaders.

In contrast, the ruling BJP is better positioned to spread its propaganda among the people aided by a strong party organization which is backed by the nationwide network of Rashtriya Swayamsewak Sangh, the BJP’s ideological mentor.

At an individual level too, Rahul’s consistent and aggressive attacks on PM Modi have not been able to dent the BJP leader’s image of a strong leader whose brand of politics still finds favour with his supporters and who is perceived to be a better communicator than the former Congress chief by many.

Congress insiders acknowledged that strategies related to macro-economic issues were hard to sell to the electorate which responds better to emotive matters.

Another setback to Rahul’s image as a 24×7 politician, who is keen to take on PM Modi, was in March when he could not stop senior Madhya Pradesh leader Jyotiraditya Scindia’s migration to the BJP. Political miscalculation and slow response by the Congress strategists led to the party losing the Kamal Nath government in the central Indian state where it had come to power in 2018 after 15 years.

The incident gave yet another opportunity to Rahul’s detractors to point out that he was cut off from the rough and tumble of domestic politics. Responding to his persistent demands of cash hand outs to the poor and the SMEs, the BJP argued that the electorate had rejected the impractical socialist ideas of the former Congress chief in the 2019 national elections.

In the run up to the 2019 Lok Sabha polls, Rahul, who was then Congress president, had announced his NYAY scheme under which 20 percent of the poorest families would be given Rs 72,000 per year each as minimum income if his party came to power.

A day after international rating agency Moody’s downgraded India’s sovereign credit rating in June Rahul slammed the government over its handling of the economy.

“11 crore Indian’s are employed by MSMEs. 1/3 of them are closing down permanently. It’s criminal for GOI not to give them cash support immediately,” Rahul tweeted on June 2.

A close look at the chain of events over the past few months  shows that warning from the former Congress chief had come as early as February this year that a tsunami was about to hit the country’s economy in the form of the Coronavirus and that the centre should start preparing for the disaster in time.

However, most of February was consumed in preparing for the visit of US President Donald J Trump who was accorded a grand welcome by PM Modi in a huge rally at the Motera Stadium in Ahmedabad, Gujarat, the prime minister’s home state.

The centre realized the gravity of the situation only by March end when PM Modi gave a call for a public curfew on March 22 and within days dropped the bombshell by announcing an all-India lockdown starting March 25 to curb the spread of the pandemic across the country.

Over the following weeks, as the nation learnt to live with lockdown 1, 2, 3 and 4, the Indian economy came to a grinding halt much like the most powerful ones the world over.

As the economy tanked a strange fear psychosis enveloped the public mind space as Covid-19 spread its tentacles across the country.

Reserve Bank of India Governor Shaktikanta Das forecasted the economy will contract in fiscal year 2020-2021. Though he did not give a specific figure, some private economists expect the economy to contract by as much as 5 percent.

Dark scenarios of a negative growth spilling over well into 2021, pushing behind any hopes of a revival, started to frighten the economists. The situation prompted Rahul to start demanding cash hand outs of Rs 7,500 per poor family and free rations to India’s poor besides monetary help to the small and medium industries in order to pull up a sagging demand. The centre, meanwhile, groped for adequate responses.

Sensing the gravity of the health emergency, Rahul then started making suggestions to the government based on his interviews with select experts including Nobel Prize winning economist Abhijit Banerjee and former RBI Governor Raghuram Rajan but the effort too met with criticism that the exercise was yet another attempt to launch the Gandhi family scion than helping the government with some constructive suggestions.

As Rahul kept reiterating the demand for a financial stimulus to boost the economy, the centre did respond, first in the form of sops to the businesses and then through a massive Rs 20 lakh crore package aimed to make the country self-reliant. However, a reading of the fine print revealed the stimulus was more aimed at long-term reforms to boost the economy than being succor for the desperate souls.

“Out of the total Rs 20 lakh crore package, Rs 8 lakh cr is the RBI’s liquidity infusion. Out of remaining Rs 12 lakh cr, Rs 10.5 lakh cr is in the form of loans to banks who will lend to companies. Out of the remaining Rs 1.5 lakh cr, the direct fiscal impact the people is only of Rs 65,000 cr, including Rs 40,000 cr additional allocation for rural jobs scheme MGNREGS which the government used to dub as useless,” said Congress spokesperson Gaurav Vallabh.

As India’s Gross Domestic Product curve got flattened instead of the desired Covid curve, unlock 1 was hastily implemented by the centre to let a semblance of normalcy return which in turn would replenish the depleted government coffers in the form of revenues.

Before unlock 1 started June 1, Rahul’s attempts to seek clarifications from the centre whether it had a lockdown exit strategy, only brought more rebuke from his detractors. Meanwhile, Covid cases and deaths kept rising across the country plunging India deeper into the health emergency and upsetting all calculations about life returning to a normal.

As questions were raised over the timing of the lockdown 1 with Rahul terming the move a failure, the government argued that any delay initially would have only accelerated the spread of Covid infections. The second argument was that the pandemic had thrown up entirely new situations and challenges before the world and that the Indian government was trying hard to implement the best practices being followed abroad.

In a way the federal structure of the country proved to be a hurdle as the centre and the states kept shifting the responsibility of implementing the lockdown guidelines at each other.

All this while, the pinch of a slowing economy was being felt by people across sectors like manufacturing, small and medium units, aviation, tourism and real estate. While the ruling BJP kept pointing out that the pandemic was the reason behind the economic slowdown, the Congress leaders argued that a neglect of the economy over the past six years had actually dealt a body blow to India’s growth story.

He pointed out that as this data is related to the period before Covid, it shows that note ban and a faulty Goods and Services Tax had hit the economy badly.

The Congress leaders pointed at another roadblock in the economic revival saying  lakhs of migrant workers who returned to their native villages from big urban centres due to lockdown are an important part of industries and if they choose not to return due to prevailing uncertainty , the problem would be further compounded. They cited the global financial crisis of 2008 to point out how the former UPA government was able to cushion the Indian economy from international head winds.