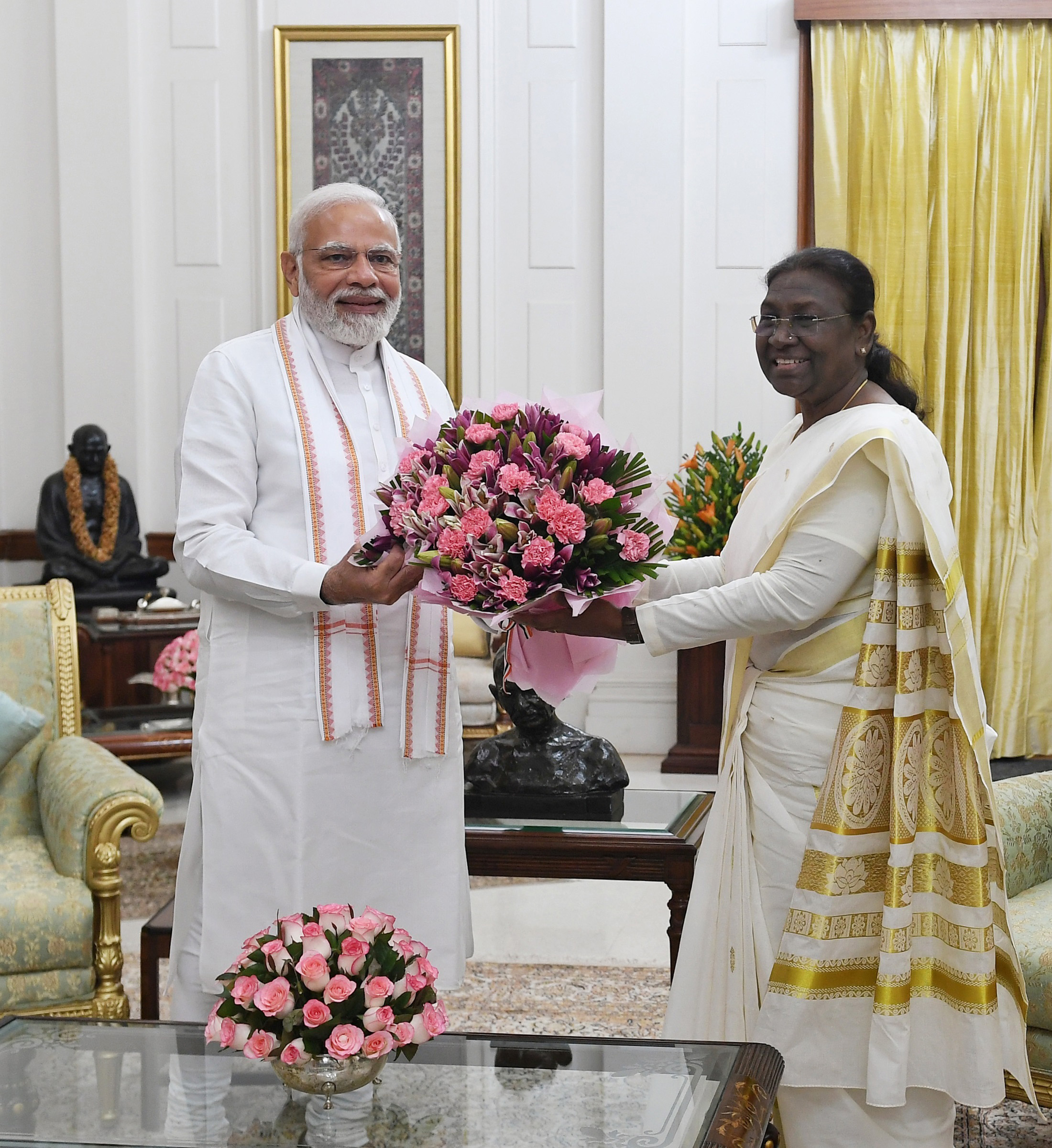 One cannot take away from Modi government that it goes that
extra mile to seek those the world ignores. It however would be naïve to see Murmu’s choice to be completely devoid of politics

Murmu has attained the highest office in the country at 64; Modi, too, took oath for the first time when he was a few months away from celebrating his sixty-fourth birthday.

Both come from humble backgrounds: she a tribal and he a chaiwala. Their personal lives were in a shambles, though for different reasons: Modi never had one and Murmu’s journey has been afflicted with personal losses: she lost two sons and also her husband within a span of six years.

But this is not about comparisons; or about similarities or differences but to drive home a simple fact: having risen from the ranks, Modi roots for the unsung men and women the world does not care about.

A case in point: Droupadi Murmu.

Till she joined politics, Murmu worked as junior assistant in the State department; also as a teacher in Odisha.

Even when she joined the BJP in 1997, she did in the lower rungs: starting off as a Councillor. Neither her election wins as MLA or her being Minister in Odisha got much attention.

When she took over as Governor, there were cursory references primarily because she was the first woman Governor of the state of Jharkhand.

The sum total: she largely remained unsung till Modi sought her out and handpicked her to be the country’s fifteenth President.

With that, the spotlight is on Droupadi Murmu: the second woman after Pratibha Patil to attain the country’s highest office.

But the selection is less about gender or her being the youngest President this country has ever had.

It is more about her being the first tribal woman President of India. It is about bringing her out from the margins and putting her centre-stage both nationally and internationally.

But this is not about Murmu alone; or about signalling to the tribals that they have a role to play in the larger context.

The big picture is about conveying to marginalised communities that under the current dispensation, they stand to be counted.

Therefore despite its critics, the Modi government can pat itself on the back. One cannot take away from him that his Government goes that extra mile to seek those the world routinely ignores.

The case in point are the Padma awardees in recent years where several unknown men and women were honoured, be it a transgender folk dancer, a house-help turned illustrator, or a Kalaripayattu exponent.

The fact that some of the awardees were  nonagenarians substantiates that their work went largely unrecognised. It was the Modi government that called out to them in their sunset years.

It would however be naïve to see the Murmu move, as it were, to be completely devoid of politics. It sure was top of the mind when the BJP zeroed in on her.

For starters, Murmu fills many slots, gender being the first. On that count of course, the Congress scored when it named Pratibha Patil as President some 15 years ago. But this stops here.

No President in the past has the “firsts” that Murmu brings with her. Apart from being the youngest President in Indian history, she is the first person from the Scheduled Tribe to hold the highest office in the country.

A Santhal by birth, Murmu hails from Baidaposi area of Rairangpur in Mayurbhanj district in the state of  Odisha.

For the uninitiated, Santhals are among the largest and oldest tribes in India, concentrated mainly in the states of Bihar, Jharkhand, West Bengal and Odisha.

The BJP’s claim that tribals have been ignored by previous regimes is not baseless.

Given that they constitute nine percent of the country’s population, Governments have failed to match their aspirations. It was only in 1999 that a separate Ministry of Tribal Affairs was created under Atal Bihari Vajpayee’s tenure as Prime Minister.

Modi is no Vajpayee and his heart may not always beat for the poor, but he sure gets his politics right.

By handpicking Murmu, Modi and his men killed two birds with one stone, politically wooing women and tribals at the same time.

Handpicking a woman as President will help dispel the impression that the BJP is anti-woman. If anything this would help position the Party as being gender-sensitive.

As for the tribal vote, it is crucial in poll bound states of Gujarat, Chhattisgarh, Madhya Pradesh and Rajasthan which have sizable tribal populations.

That there is a chasm between the tribals and the Government is well known particularly when the demand of the tribes to be enumerated separately from the Hindus is gaining ground. In fact the support from Jharkhand Chief Minister on the issue is enough to warn the BJP to mend bridges. And it is here that Murmu can pitch in.

Irrespective, the sense of dignity that her ascendency has accorded to the entire tribal community is, in one sense, unparalleled. That there were celebrations all around substantiates that the tribals have endorsed BJP’s master-stroke.

Even if it does not deliver tangible results by way of actually improving or empowering the tribal community as a whole, the Party’s outreach is a good start.

However, there are apprehensions surrounding Murmu’s ascendency.

Taking the last point first. If past experience is anything to go by, then Murmu has stood her ground. As Governor she returned the Bills that were introduced to amend the Tenancy Acts because they were perceived to be anti-tribal.

As for her being able to handle the Presidency, her experience as Governor will stand her in good stead. The grandeur of Rashtrapati Bhawan may be awe-inspiring and could dwarf the best but then Murmu is no stranger to sprawling homes, having lived in the Governor’s House in Jharkhand. Of course this does not take away the fact that her ancestral home in her native village is reportedly next to a shack.

But that is History. Droupadi Murmu’s Time has come and she seems geared up to make the most of it.