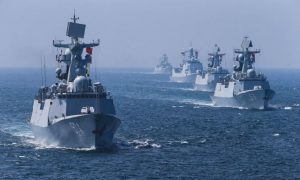 Of all the nations in the world, only 164 countries have a navy and just 18 of them manufacture warships (above 3,000 deadweight tonnage) for their own use or export. While the sea has historically played an important role in a country’s trade, industry, technology, economics, diplomacy, expansion and colonization, it was World War-I which signalled a paradigm shift pertaining to its enhanced role in the definition of a superpower.

The 20th century war enlarged the scenario with enhanced combat capability of the vessels and versatile use thereof, by belligerents. It took a five-year World War to transform and tilt a land power into an actual, visible, ship-operating sea State. Sea replaced land. And that happened in the Pacific Ocean as the traditional naval balance shifted from the West (Atlantic Ocean) to the Far East, spanning from the US to Japan and to the Chinese coastline. In real terms, for the first time on the naval canvas, two powerful navies emerged in the Pacific Ocean: From the mighty US and the tiny Japan.

Since the war left Japan the dominant power in the Pacific, especially owing to the eclipse of the Russian army and simultaneous destruction of Berlin and Moscow navies, the traditional naval powers of the West could not take kindly to the rise of (Asia’s) Nippon navy. This resulted in the Washington Conference of 1921-1922 which concluded three treaties — the Four-Power Pacific Treaty; the Naval Treaty; the Nine-Power Treaty on China — essentially all regarding the Pacific. As a result, Japan was checkmated and its navy drastically cut its size and strength.

Interestingly, a big country like China was never a naval power or maritime nation during its 4,000 years history. Its so-called Silk Route essentially ran through the great Euro-Asian landmass, for trade, terror, tourism. Thus, China saw with awe the unprecedented December 1941 blow inflicted by the Japanese aircraft carrier force on the US naval base Pearl Harbour. The budding leaders of the Communist Party of China, who took control of the State in 1949, after a prolonged civil war deep inside their own land, saw it all in the post-Second World War era. The importance of sea power of the State was not lost on them.

Thus, after a slow and somewhat lethargic start, the Chinese went full steam from the 1990s when they established themselves as credible trade partners of dual use, high quality military technology. With an ability to access technology, through fair or foul means, and reverse engineering, Beijing gradually built a navy to compete with and challenge, the US in the sea, hitherto the sole supreme operator across the vast Pacific since the end of the World War-II.

As China always looked at its bitter and traditional foe Japan’s military with a tinge of envy and admiration, Beijing emulated Tokyo. Its navy, aka the PLA Navy, today is constantly challenging the smaller neighbours and harassing the US in the western fringe of the Pacific Ocean.

The fight for the Pacific is over in one stroke. China trumps the mighty US without a single shot. Soon, comes, another shocker. More than 1,000 of the 1,862 sailors of the French Navy’s sole 43,182 tonne aircraft carrier Charles De Gaulle, too, hospitalised owing to COVID-19. The best possible news for China, however, comes from India. At least 25 Indian Navy men from the Mumbai-based shore establishment Angre are afflicted by the virus, sending the Western Naval Command into a tizzy.

Is the writing on the wall visible? Is the COVID-19 paving the way for China to “peacefully” acquire and procure strategic world assets without a fight? Making the enemy surrender before and not after a fight. War in accordance with the art of war of Sun Tzu, Mao Zedong and now Xi? It is time to ponder.

The writer is the author of ‘China in India’. Views expressed are his own