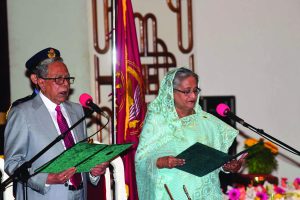 The landslide victory of the Sheikh Hasina-led Awami League and its allies in the just concluded parliamentary elections in Bangladesh was not surprising. The incumbent Prime Minister’s party was using all kinds of tactics, right or wrong, to ensure the defeat of the jurist Kamal Hossain-led opposition front with the Bangladesh Nationalist Party (BNP) as its key member. The BNP was in no position to pose a serious challenge to the ruling League with the BNP’s top leader Khaleda Zia, a former Prime Minister, being in jail after having been convicted in a corruption-related case, and her son Tarique Rehman, the officiating chief of the BNP, running the show from London.

Hossain, a former minister, was the right-hand man of the League founder, Bangabandhu Sheikh Mujibur Rehman, assassinated in August 1975 along with his family members except for his two daughters, Sheikh Hasina and her younger sister Sheikh Rehana, who were in West Germany at that time. Hossain, who has been associated with the League throughout his long political career, has turned anti-Hasina as he feels that she has deviated from the path shown by the Bangabandhu and turned dictatorial in her approach.

He is a highly respected intellectual-politician but no match to Sheikh Hasina in terms of popularity among the masses. Yet he led the opposition alliance from the front which could have performed better than winning merely seven of the 300 seats in Parliament for which the elections were held if the ruling party had not indulged in large-scale arrest of opposition activists and intimidation of BNP workers besides allegedly rigging the elections.

The opposition front, therefore, has a point in refusing to accept the “farcical” election results, which show that the League has got 288 seats with 98 per cent of the votes cast going in its favour. Fifty seats are reserved for women in Bangladesh’s parliament.

The League-led alliance blatantly tried to ensure that the opposition had negligible presence in the elected House of the people. The increased bitterness between the two sides is unlikely to disappear after the electoral battle. It may continue to disturb the peace in the poverty-stricken nation, causing more problems for people.

All that happened before the elections shows that Hasina does not believe in having a powerful opposition, though democracy becomes a farce when the opposition is almost non-existent. Her claim cannot be accepted as the reality when she says that the Bangladesh elections were “totally free and independent” and that “I have nothing to hide. Whatever I do, I do it for the country. My conscience is clear.”

There could be no free and fair polls in Bangladesh under the circumstances that prevailed. In fact, the circumstances demanded that the elections should have been held under a caretaker administration denying the ruling party any opportunity to indulge in coercive politics. The ruling party government functioning as the caretaker administration in the situation that prevailed in Bangladesh only amounted to allowing the League to recapture power by hook or by crook.

There is no doubt that the Sheikh Hasina government performed reasonably well on the economic front during its previous two tenures. But that was no reason for her to indulge in intimidating politics and behave like a dictator. She must be told by the world community that crippling democracy on any pretext will not be appreciated and that the opposition must be allowed to flourish and play its role in an atmosphere free from violence and corrupt practices. India particularly has a special role to play in not only promoting economic development in Bangladesh but also helping create an atmosphere in which democratic institutions become stronger.

In the process, the “Bangladeshi problem” in India will also disappear with the passage of time. A greater focus on development-related activities in Bangladesh will reduce poverty considerably, preventing illegal migration from there owing to compulsions of survival.

Of course, India has got a special opportunity to further strengthen its relations with Bangladesh with Sheikh Hasina recapturing power. India must find ways to deter Bangladesh from leaning towards China for its development-related requirements. China is the largest importer of goods from Bangladesh and the third largest trading partner with Dhaka.

So far as India-Bangladesh bilateral trade relations are concerned, the flow of goods and services between the two neighbours has increased considerably during the past few years. In 2013-14, India’s exports to Bangladesh stood at $6.1 billion and imports from Bangladesh were valued at $462 million. The figure for India’s official exports to Bangladesh increased to $5.8 billion, but its imports from Bangladesh rose to nearly $518 million, according to World Bank statistics. The total formal bilateral trade exchanges between the two countries in 2013-14 were of the value of $6.6 billion, which was much higher than the figure of $2.7 billion five years earlier. Yet the incremental trade growth between India and Bangladesh remains just over 1 per cent since the mid-1990.

However, with an annual turnover of goods and services worth $9 billion plus, today Bangladesh remains India’s largest trading partner in South Asia. There is asymmetry in their trade as the balance of trade is tilted towards India, an area of major concern for Bangladesh. India has taken some corrective measures like the signing of the South Asian Free Trade Area agreement in 2011 to allow duty-free exports from Bangladesh to India, yet a lot remains to be done. There is a plan to set up a special economic zone (SEZ) for Indian companies in Bangladesh from where the manufactured goods will be exported to India. This will increase the trade volume between the two countries and also correct their balance of trade position.

Besides tackling the issue of a huge trade imbalance, the two countries are seriously trying to find a solution to the differences over the sharing of Teesta river waters. All the irritants in this regard have been taken care of and now a formal accord may not be difficult to get signed. The river originates from Sikkim but reaches West Bengal through territories in Bangladesh.

The most relieving development that has taken place between the two neighbours during the Awami League’s rule in Bangladesh is a clear message having gone to anti-India elements is that they can no longer hide themselves on the other side of the border after committing crime in India. Bangladesh handed over many such elements to India in the recent past. This could not be possible had there been a Khaleda Zia government in Dhaka.

What needs to be clearly understood in both New Delhi and Dhaka is that they should cement their relationship in such a manner that it becomes an example for other neighbours to emulate in their own mutual interest as well as in the interest of peace in the entire South Asian region.