A Delhi court on Monday directed RJD chief Lalu Prasad Yadav to appear before it on December 20 through video conference in connection with the IRCTC scam case.

The directions were passed by special judge Arun Bharadwaj.

The RJD chief could not appear before the Delhi court due to his ill health. He is being treated for various ailments at the Rajendra Institute of Medical Sciences (RIMS) in Ranchi.

The court directed the Enforcement Directorate (ED) and Central Bureau of Investigation (CBI) to ensure Lalu’s presence through video conference either from jail or hospital.

The CBI and ED are probing the case and had named Lalu Prasad, his wife and former Chief Minister Rabri Devi, their son Tejashwi Yadav and others as accused in the chargesheet.

The case is related to alleged irregularities in granting the operational contract of two IRCTC hotels to a private firm, for which a three-acre commercial plot at a prime location in Patna district was given as a bribe. 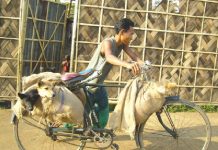