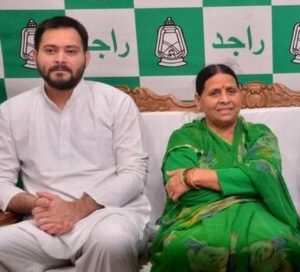 A Delhi court on Saturday granted bail to former Bihar Chief Minister Rabri Devi, her son Tejashwi Yadav and others in an Indian Railway Catering and Tourism Corporation (IRCTC) scam case lodged by the CBI.

Special Judge Arun Bhardwaj also granted interim bail till November 19 to Rabri Devi, Tejashwi Yadav and others in a money laundering case filed by Enforcement Directorate (ED) in relation to the alleged scam. The court asked all the accused to furnish a personal bond and surety amount of Rs 1 lakh each.

The regular bail however, was not granted to the accused in the ED case after the agency sought time to file a reply to the bail applications.

RJD chief and former Chief Minister Lalu Prasad Yadav did not appear before the court as doctors have declared him physically unfit to travel.

The court fixed November 19 as the next date of hearing and directed Lalu Yadav to appear via video conferencing.

The case is related to alleged irregularities in granting the operational contract of two IRCTC hotels to a private firm, for which a three-acre commercial plot at a prime location in Patna district was given as a bribe.

The Central Bureau of Investigation (CBI), in April had filed the charge sheet in the IRCTC hotels maintenance contract case, and said there was enough evidence against Lalu Yadav, Rabri Devi, Tejashwi Yadav and others.