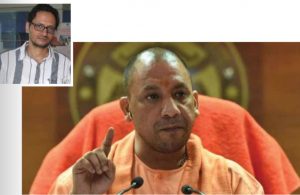 Highly motivated by the ideals of Shaheed-e-Azam Bhagat Singh and his father, Hoshiyarpur (Punjab) based, upright and public spirited officer of Indian Police Service, Jasvir Singh (1992 batch), has been mysteriously placed under suspension by Uttar Pradesh government. This unusual drastic action came in wake of his interview to a web-based news portal, exposing “the vicious corrupt nexus among criminals-police and politicians that rules the system, rather than the rule of law as mandated under the constitution of India.”

Jasvir, who comes from the background of a humble farmer family, alleged in his interview, that in the long span of his career he had suffered a lot because he served the people and the constitution. He never embedded himself with any politician of the day, who wants totally committed police officers under their protection. In his 26 years of service, he was never entrusted with real police work. In all these years, this senior IPS cop has been stuck in redundant postings, with little to do any meaningful job.

His father Arjan Singh, who was a Lance Naik in the army and then a farmer, had a high regard for police officers and wanted him to be one. “He was very impressed by police officers, he wanted me to be one, but an honest one,” he said. His father imbibed him values of honesty and taught that- “it is better to have bullets on the chest rather than excepting bribe in service.” Perhaps his motivation forced him to qualify civil services despite being a qualified civil engineer. Singh believes his stubbornness is rooted in his farm boy upbringing. He recalls mornings when his father woke him up at three in the morning to plough his fields.

His superiors and colleagues treated him just like persona non grata. He feels suffocated among his colleagues, as most of them have surrendered their free conscience and authority in the feet of their political masters to serve their stakes rather than serving people in accordance with laws and constitution.

UP police spokesperson RK Gautam confirmed that the 1992 batch IPS officer Jasvir Singh, who was last posted as ADG Rules and Manual, was placed under suspension. However, he did not clarify reasons behind such a drastic action. Except confirming news of his suspension on a private WhatsApp group of the U.P. police meant for journalists he remained tight-lipped.

Indirectly he indicated the information circulating about the reason for the suspension was correct.

In a candid interview with website ‘https://www.huffingtonpost.in/’ Jasvir Singh shared his personal experience how he paid the price for his upright, fearless, and lawful working against the people in power and suffered their wrath in long run of his career. “There can be no compromises in criminal offenses. I am an IPS officer, it should stand for something,” Jasvir asserted in his interview.

In the heart to heart talk he remembered how in 2002 as a young, idealist and enthusiastic Indian Police Service (IPS) officer he looked into the criminal cases pending against Yogi Adityanath, then Member of Parliament (MP) from Gorakhpur, and initiated proceedings to book him under the National Security Act (NSA).

Singh said he refused to withdraw his case for preventive detention against the sitting MP despite pressure from politicians of the Bharatiya Janata Party (BJP), who were in power at the Centre at the time, and the Bahujan Samaj Party (BSP), which formed the state government. Two days later, he was transferred to the Food Cell of the UP police.

One year thereafter he again take on a powerful food minister and accused Raghuraj Pratap Singh aka Raja Bhaiya, in the Mulayam Singh Yadav government, of corruption in the Lakhimpur Kheri food scam. Even CBI officers who were investigating the food scam on the directives of High Court admired the fact how Jasvir placed incontrovertible evidences in the investigation leaving no escape to nail him in the trials. As soon as he implicated the minister in the scam he was transferred out of the Food Cell of the UP police. If Singh anguishes about the wasted years, the police officer does not let on. He used to say that taking a stand and sticking is better than being a “career bureaucrat.”

“They want loyalty to political persons. This is totally unconstitutional. When asked if he sees himself as a role model for young officers who might be at the crossroads — agonizing over kowtowing to politicians for the sake of their careers — Singh asks why a big deal is made of something that should be “normal.” “You don’t need to be a messiah to perform your duties. Normal duties demand that you act with absolute integrity and total allegiance to the constitution,” he said in the interview.

“They want loyalty to political persons. This is totally unconstitutional,” he said. “If we don’t resist, things won’t change. Resisting is the most rewarding thing especially when there is a big allurement.” “I became a police officer to serve the public, not politicians. There is no middle path when you are serving the people. You have no option but complete adherence to the rules of the service,” he remarked. “You have got to be honest.”

Under the present Adityanath-led BJP government, which is accused of resorting to extra judicial killings to maintain law and order, Singh has no work. Even if he did have a “mainstream” posting, the police officer fundamentally disagrees with “encounter” killings becoming the norm. “You are killing people in the name of democracy. How does that happen?” Speaking of “encounter” killings under any political regime, he said, “Only rival gangs are eliminated. It is not even equitable elimination”

Singh is now serving as ADG (Additional Director General of Police) Rules and Manual in UP, a post that requires him to do no work. “I go attend office. There is a small room. I sit there from 9:30 am sharp. I take my lunch like a school boy. I have 40 to 50 books that I have got privately. I keep reading one after the other and at 6:00 pm sharp, I leave without doing any work,” he said. “I’m being paid whatever an ADG is entitled to without any public job being done.

It appears that the suspension of Jasvir Singh is not just account of his recent interview but long nurtured malice about him in his superiors who opted for favours to stay blessed with greener postures by deeply associating with venomous clandestine activities of various political masters. Jasvir exposed this nexus in a seminar held in the constitution club at the national capital where he had narrated entire story and at the end, he recited revolutionary couplets of a Punjabi poet dedicated to the martyrs who sacrificed their lives for our nation.