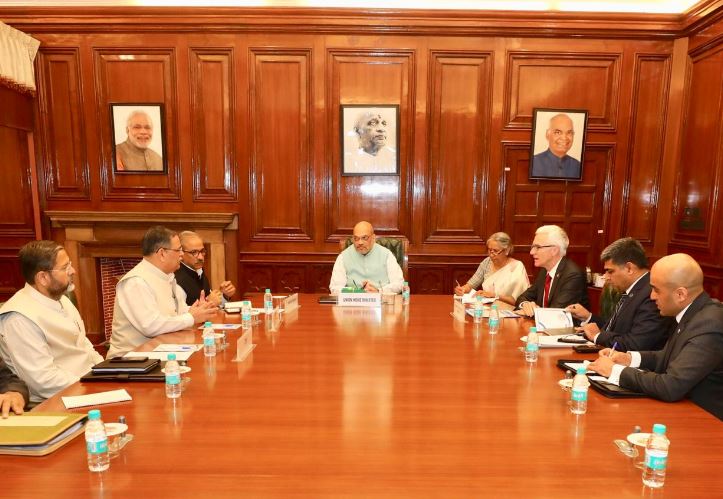 Secretary General, INTERPOL Jürgen Stock on Saturday called on Union Home Minister Amit Shah in New Delhi. He thanked Amit Shah for the commitment shown and cooperation extended and assured best support of INTERPOL for the fight against terror. He also conveyed that the three focus areas of INTERPOL are counter terrorism, organised & emerging crime and cyber crime.

During the meeting, Shah proposed hosting of INTERPOL General Assembly in New Delhi in the year 2022, as part of celebrations of the 75th Anniversary of Indian Independence. He also expressed India’s willingness to be a Regional Hub of INTERPOL Global Academy by extending assistance as well as infrastructural support.

While in conversation with Stock, the Home Minister emphasised the zero tolerance approach of Prime Minister Narendra Modi to Drug Trafficking, International Terrorism, Dirty Money and Money Laundering. He called upon INTERPOL to accord top most priority in fighting these menaces. Shah also underlined the urgent need for a long term strategic action plan in fighting these menaces not just in Asian region but across the world.

Shah conveyed that over the years, Indian Intelligence and Investigation Agencies have acquired rich and varied experience in their decades old fight against terrorism. INTERPOL is welcome to actively collaborate with Indian Law Enforcement Agencies to make best use of this expertise. He also mentioned the recent amendments in UAPA.

Stock appraised the Home Minister about the databases of INTERPOL that house 100 million records, secure global data communication channel (I-24/7) and other tools through which INTERPOL is assisting Law Enforcement Agencies across the world. He desired that Indian Law enforcement Agencies may make efforts to ensure more extensive use of INTERPOL’s tools and databases, more particularly at Border Control Points. Mr. Stock also assured enhanced operational cooperation.