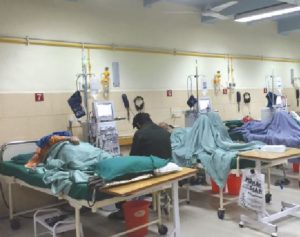 On August 5, 2019, Indian government scrapped Article 370 and 35-A that provided the special status to the state of Jammu and Kashmir. All the communication and internet services were blocked. Normal life came to a complete halt and all the sects of society since then are facing tremendous trouble. Patients who are suffering from different life taking diseases are torment economically as well as mentally. Families who belong to below poverty line (BPL) families are selling valuables to meet their medical costs.

Zoona Begum 59 had a kidney failure six years before due to high blood pressure and diabetes. Since then she is surviving through dialysis treatment. Her son is a daily wager who used to spend all his income on her health till October 2018 and they were managing their livelihood somehow. In October 2018 they came to know about the Ayushman Bharat health scheme and after proper documentation and authorization Zoona received a ‘Golden Card’.

With this card, she now was availing the free dialysis treatment from the Khyber Hospital Srinagar till August 2019. Ayushman Bharat health scheme is completely managed through internet services and if the service is not available one needs to pay to go through the dialysis treatment. Zoona’s son is not in a position to earn anything since the entire valley of Kashmir is under continuous curfew and restrictions are imposed by the security forces throughout.

“I am trying to manage my mother’s dialysis now through different means. I have spent all my savings in past two months and now I have to take credit as well. We don’t have a stable source of income and dialysis is not a onetime treatment and this makes us suffer everyday,” says her son with a sigh.

The procedure to receive the free dialysis treatment is based on the availability of the bed. A patient has to register with a hospital, check for the vacancy and if the bed is available then the patient is registered with the hospital. Without the golden card every patient has to spend Rs2500 per dialysis and every patient has to repeat this four hour treatment twice in a week.
Ghulam Hassan Parray, who hails from Soiteng, Srinagar, is also surviving through dialysis only since January 2019. Dr. Tajamul who treated him for four years finally decided on medical grounds that Parray needed dialysis as no other treatment worked. Parray, who is 76, was accompanied by his son (Prince) who works as a salesman in a local business. Soon doctor’s informed them about the card and they started to avail the facility but this facility came to an end in August as the internet services stopped to work.

“We belong to BPL families and we are already suffering every day. We don’t have enough to eat, how will we arrange money in conditions were we don’t even go out forget about going to work. By stopping the medical facilities they are putting us in more trouble,” says Prince.

In Srinagar’s different hospitals like Florence hospital, Kidney hospital etc patients receive dialysis treatment but Khyber hospital in Srinagar’s Khanyar area is the one hospital with huge flow of patients due to its capacity and central location. Every day 30-32 patients go through the treatment. All these patients were using the golden cards to avail dialysis facility and all of them belong to underprivileged families who cannot afford this life saving treatment.

Shaista, 24, who hails from the border area of Handwara around 72 km away from the main city Srinagar suffered a kidney failure during the disastrous flood of 2014 due to high blood pressure. Her father, who is a contractual employee, tried a lot to arrange money so that Shaista can go through a kidney transplant procedure but the treatment was costly and therefore, they looked for an alternative. It’s been five years now she is going through this process.

“We are six siblings and I am the eldest one. Our area generally remains tense and the current condition has made it worst. Due to the non availability of public transport we have to hire private cabs and that costs us a lot and the treatment itself is so costly,” says Shaista. Lying on a bed and a cotton scarf draped around her head. Her face pale and lips had developed cracks. “My father cannot afford this money but we don’t have any option but to do something. So, we are selling our valuable items to cover the cost but how long will that even last,” she added.

Khyber administration agrees with the difficulty of the patients and despite the communication blockade they continued to provide the free treatment till 26th of August but then they decided to stop the process and started to charge the patients. “Internet is the only source to run this scheme and if we do not upload the credentials we will not be able to provide the facility. Also, there are no funds now with us as we have not received funds from the insurance company since June. We procure everything from the vendors and they only deliver the medicines once we pay them” Says Dr. Shahnawaz Amin who handles the administration part of Khyber hospital.

Ghulam Nabi Shah too was diagnosed with Kidney failure in 2017 and after selling a patch of land he was able to manage and afford the cost of kidney transplant. His wife Gulshan Akhter became his donor and the procedure was done in Soura hospital Srinagar but within few months after surgery shah got infected with BK Virus and was suggested to go for dialysis.

After months of treatment his kidney at last stopped working and he was left with no option but to undergo dialysis. They sold another patch of land to continue the dialysis. Finally, in 2018 they too received the golden card and availed the free dialysis. Shah hails from the Kokernag area of Islamabad and the couple has two minor children. Five year old son and a seven year old daughter.

“Since my husband cannot work I used to do different jobs in the village to run the house but now we have shifted to Srinagar because there is no transport to commute. We have rented a room at Tangbagh Srinagar and stay there now. We don’t have even anything to sell now to meet the hospital or living cost,” Gulshan said.

“We are committed to our patients and want to provide the services. In normal conditions authorities from Ayushman Bharat scheme used to visit us thrice in a week but now we do not see any one. We wrote to the administration and met them as well but we received no communication from them. Nobody is ready to take the responsibility,” says senior Dr Showkat Shah at Khyber hospital.

Ever since August there is a complete blockade of communication and internet services in the valley. Although, the internet facility has been provided to a limited hospitals Khyber is an exception.

“We know patients faced issues but from the day one we are trying to restore things as much as we can. We are also providing internet facilities to hospitals at different places who are working with the scheme as we completely understand the nature of the scheme and its dependency on internet services,” says state nodal officer and deputy secretary health Ata-ul-Munim Tak.

Tak said “We are in communiqué with authorities in different hospitals and are trying our best to resolve the issues. We also want to assure all the patients who are using golden card and have paid for their treatments during this phase that the entire amount will be reimbursed soon”. 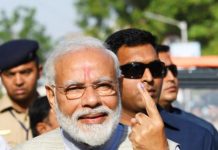 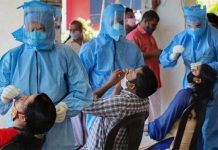