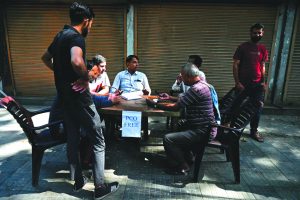 As soon as phones were partially restored in Kashmir, Suhail (name changed), a budding author called up his publisher Fresh Code Books — a self-publishing platform, which been shut since August 5. “What happened to my book? Will it sell?”, he asked. A sad silence ensued, following which a resigned voice at the other end responded a customary “Inshallah! We will see what happens.” The interaction is an appropriate representation of the resignation, despair and paralysis that has gripped Kashmir since the clampdown from August 5.

The three-month suspension of internet services in Kashmir following the abrogation of state’s special status under Article 370 has left many young entrepreneurs in a fix as they relied mostly on internet to offer their services, and social media to promote their services.

Sample this: Launched by three youngsters, Ehsaan Qudussi (34), a technocrat, Irshad ul Islam (34), a marketing professional, and Huzaifa Pandit (31), a research scholar, in February this year, the platform aimed to offer all services under one roof, from design to editing to publishing to promotion at economical and affordable prices. However, their online venture has been shut since the night of August 4, when internet services were suspended for security reasons.

“We relied primarily on social-media platforms, open mic sessions and word of mouth publicity. All three avenues were put paid to by the internet ban, and restrictions following it. Since revenue dropped to zero, we had to relinquish our office space as we could not afford rent anymore,” explained Huzaifa Pandit, one of the cofounders of the publishing platform, who is responsible for soliciting and evaluation of manuscripts, proof reading and editing.

The platform had published several books in five six months, and had begun to create a buzz in the market. At the time of lockdown, the cofounders were in talks with five- six authors, and three four manuscripts were already being worked upon. “Just before the lockdown, we published a novel by a journo that got a mention in all leading papers of the valley. We had already graduated  to thinking about sponsoring readings, and a literary festival as our business was expanding rapidly,” said Huzaifa.

Once it was apparent that the clampdown was not ending anytime soon, they were forced to abandon the pursuit as they sought employment outside the state. The owners of the platform are skeptical about the future of the platform once the internet is restored. “I doubt if we will be able to capture back our market share and expand at the same pace before. A nice literary culture was developing in Kashmir. But with the lockdown cynicism has set in, and with the economic slowdown in the country, and grave economic crisis due to lockdown in Kashmir, paying for publishing will be the last item on anyone’s list of priorities,” the young entrepreneur said.

To compound their misery, the rising default rent and an unsold inventory has forced them to put the office space on sale. With revenue at a zero, and shrinking employment opportunities in the valley, the venture is simply unaffordable.

Similarly, an online books store, Lal Chowk was fast gaining popularity among the youngsters of the valley, when August 5 came as a bolt out of the blue. Their business has also came to a complete standstill following the communication blackout.

The five entrepreneurs, all in their mid-twenties dreamt of starting their online business while pursuing their MCA from University of Kashmir.

In May 2017, they set up an e-commerce web portal under the name “Life Clicks”. It sold everything from clothes to electronics. Under the same company they started a book store titled www.Lalchowk.in and Lal Chowk online shopping store application.

However, the response to their company was not up to the mark, yet their online book store received orders in bulk. With this kick started the idea of Lal Chowk. Their focus shifted to the bookstore only. In tune with the trends on the ground, they stocked up everything from popular authors as well as offering budding authors a platform to sell their books without hassle.

“We were doing well before the communication clampdown. Around 15 orders were placed every day. With the snapping of internet, everything has come to a halt. Neither our clientele, nor we have been able to reach out to each other,” Haseeb rued.

It was in late September when the cofounders were able to contact each other. By that time, around 100 orders had been placed. “After the crisis ensued, we lost contact with each other. We met in September and one among us had already left Kashmir in search of a job. He informed us via landline phone that more than 100 orders had been placed on the book store,” said Haseeb.

He recalls, “We delivered the orders gradually while tendering apologies to our clients for the delay.” Except for Haseeb, the other four co-founders are now exploring alternative modes of business. The constant pressure from the family members has prompted them to look for other stable sources of income.

While the uncertainty around the situation still lingers around in the valley, Haseeb has not given up hope. The entrepreneur feels the store will be able to capture the market share once the internet services are restored. “Most likely e-commerce sites like Amazon and Flipkart will not abruptly restore their business here after the internet resumption. It will take them a while. In such a scenario there are more chances that customers will approach us,” he says.