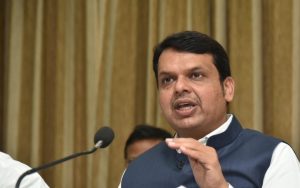 Mumbai : Inspite of the scanty rainfall in the state last year the agriculture production touched 115 lakh MT. This is the success of investment in agriculture and water conservation works. For this year‟s Kharif season ample stocks of seeds and fertilizers are available. Banks have been directed to give crop loans sufficiently and timely. The farmers should follow the guidelines of agriculture department and also forecast of rainfall before sowing so that they can avoid the repeat of sowing operations. As per the meteorologicaldepartment forecast Maharashtra is expecting average rainfall. The government is fully prepared to make this year‟s kharif season successful, Chief Minister Devendra Fadanvis assured the farmers. He was speaking at the state level pre kharif review meeting at Rangsharada Sabhagriha, Bandra .

Chief Minister Fadanvis said that the meteorological department has made a forecast of average rainfall in the state this year. While the entire country will receive 96% of rainfall, Konkan and Central Maharashtra will get an average 93 to 107%, Marathwada 90 to 111%, and Vidarbha will receive 92 to 108 % rainfall according to forecast. This year there will be average rainfall and June will have less than average rain. Farmers are given guidance and suggestions about farming on M Kisan Mobile messaging service. Last year 40 crore messages were sent to them. In the last three days over 5 crore messages were delivered and this guidance is proving useful to the farmers.

The total area under Kharif crops in the state is 151 lakh ha and on an average 55 to 60 % area is devoted to cotton and soyabean. Paddy 10%, sugarcane 8%, maize 11 % and other crops are taken on the remaining land. The area under cotton and soyabean is more in
the state. Last year the state received average 73% rainfall; Marathwada and some other places recorded 38.40% to 50%. But inspite of scanty rainfall, the productivity recorded an overall increase. While Cotton registered 17 % increase in production soyabean too shown considerable increase.

Investment in agriculture has increased, as compared to last five years, the investment rose by four times in this five year term. This has helped reduce the dependency on rainfall and the massive drought notwithstanding, the agriculture production has increased in kharif season. The pulses received a setback but oilseeds production increased.

There is ample stock of seeds and fertilizers for the kharif season and there will be no shortage of seeds and fertilizers. The state government has taken sufficient care in case of pesticides spraying. Last year the ball worm was successfully controlled. This year the maize crop is under the attack of „Lashkari‟ pest. Farmers are being awakened about this. The crop sowing records will be maintained properly and effectively, with the help of technology wherever necessary. The state government has made preparations for artificial rainfall in consideration of rainfall possibilities. The complaints of farmers about crop insurance will be resolved soon and the entire state government machinery is ready to make this kharif season a
grand success, Fadanvis said exuding confidence.

CM said agriculture schools have played an important and significant role in increasing productivity last year. With this experience at hand, the state government has organised 12000 farm schools this year and their planning is done. 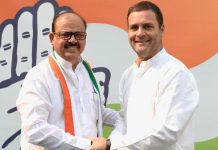