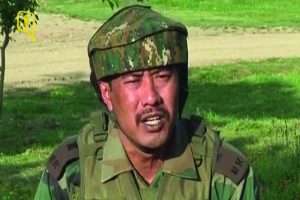 On the day, the Army court of enquiry indicted Major Gogoi for “fraternising” with a local girl at a Srinagar hotel, a local daily ran a story with a telling headline which went as: “Spared for using man as shield, indicted for hotel outing.” In April last year the Army officer had controversially used a civilian named Farooq Dar as human shield by trussing him up on the bonnet of his jeep and parading him through the villages in Budgam, ostensibly to pre-empt stone-pelting. The video of the incident went viral, generating outrage in Kashmir and across the country and also support from a large section of the public opinion outside the state. But far from being punished, Major Gogoi was not only given a clean chit but also conferred with a commendation medal by no less than the Army chief General Bipin Rawat for his “sustained efforts in counter-insurgency operations as well as his presence of mind and initiative to prevent bloodshed in a volatile situation”.

In Kashmir that was seen as adding insult to the injury. Ironically, the Gogoi’s human shield Dar was among the tiny group of people who had defied Hurriyat and the protesters to vote in the then Srinagar parliamentary by-poll, thereby daring to side with New Delhi amid an all-out Azadi campaign in Kashmir. But instead of rising to his defence, central government sanctioned his torture by the Army. Also, despite the facts about Dar being well known, he was projected as a stone pelter to strengthen the argument that using him as human shield was justified under the circumstances.

But now the Army has initiated court martial proceedings against him after holding him guilty of trying to enter a Srinagar hotel with a Kashmiri woman early this year. At the time an altercation had broken out between him and the hotel receptionist who had refused to offer him room. He was found guilty on two counts: one, fraternising with a local person despite official instructions to the contrary, and two, doing so when he was on duty in an operational area.

Interestingly, the Army’s enquiry into the human shield case is yet to be concluded. But its outcome has been rendered irrelevant after the Army chief chose to honour him over the
incident. In Kashmir, the import of the Army’s differential response to the two incidents hasn’t been lost. It has become a fresh cause for grievance against New Delhi’s approach towards the ongoing turmoil in the state. Many have picked fault with the intention behind the Major’s indictment. “Enquiry has no reference to the fact as to why Gogoi brought a minor girl to hotel but as to why he left the camp without informing the commanding officer,” posted one Shafqat Nazir on Facebook. “So, there is nothing for us to cheer about”.

Some, however, saw it as a “poetic justice”. “There is a pin drop silence in the camp of right wingers who openly and emphatically hailed Major Gogoi for violating human rights when he tied Farooq Dar at the bonnet of his jeep, and also defended him when he was caught with a minor girl in a hotel,” wrote Nighat Rather on social media. “Now when the military court has initiated disciplinary action against Major Gogoi, cat caught their tongue. Now they are in big dilemma what to do as they can’t point out fingers on Army and on other hand can’t criticise their hero whom they once hailed it at the top of their voice”.

The human shield victim Farooq Dar himself sees it as divine justice. “For me the justice has been done. And it has been done by God. His stick makes no noise when it strikes,” Dar told Tehelka. “At the time I had cast my vote defying the widespread boycott. But he branded me a stone pelter, tied me to his jeep and beat me up.”

Similarly, the father of the woman who was caught with Major Gogoi has also expressed satisfaction at the indictment of the Army officer and urged the Army chief to live up to his promise of handing an exemplary punishment to the guilty officer. “Our family has suffered a lot since the incident. We have struggled to reconcile with the situation,” the father told the media. “We will be satisfied if the Army officer is punished for what he did to us.”

However, at the same time, the father also wants punishment for Sameer Ahmad Malla, a local resident, who had accompanied Major Gogoi and the woman to a Srinagar hotel and engaged in altercation with the staff there when they refused room to the Army officer. “It was he (Malla) who brought Major Gogoi twice to our home on one or another pretext,” the father said. “He is also the culprit. He shouldn’t be let off”.

The poor family which lives at village Chak-Kawoosa has been facing social stigma since the incident. The woman has been sent to live with the relatives in another district. However, in her statement to the court last year, the woman had accepted that she had willingly gone with the Majir to the hotel.

In Kashmir, the people have tended to look at the Army’s differential approach to two transgressions by one of its officers in a span of one year as of a piece with the New Delhi’s current hardline policy towards Kashmir. “If anything, it shows even the parameters for punishing an army personnel have shifted. If an army personnel has committed excess against a civilian in the state, it can be overlooked, justified and merit even an award. But if it is about a violation of the Army discipline, the erring personnel can be immediately taken to task,” says Naseer Ahmad, a local columnist. “This is why while the probe into Major’s outing with a local girl was completed within a few months that in the human shield incident is pending since one and a half year now”.

Further deepening this endemic sense of grievance is the award of Shaurya Chakra to Major Aditya Kumar on Independence Day for valour while not engaged in direct action with the enemy. In January, Major Kumar’s unit had had fired at a stone-pelting mob in Shopian that left three civilians dead. Following the incident, the Jammu and Kashmir Police registered a case under sections 302 (murder) and 307 (attempt to murder) of the Ranbir Penal Code against the personnel of the army unit, including Aditya. But after Major Kumar’s father, Lt Col Karamveer Singh, moved the Supreme Court for quashing the FIR, the Court restrained the J&K Police from taking any “coercive steps” against army officers, including Major Kumar. The award to Major Kumar similarly triggered outrage in Kashmir. On social media, people slammed the move, some even terming it as New Delhi’s gift to Kashmir on
Independence Day.

“This apathetic policy towards human rights excesses in Kashmir will only further alienate Kashmiris and stoke more anger and violence,” says Naseer. “New Delhi could help its cause more if it is non-discriminatory in how it deals with the erring security personnel in Kashmir”.

Bias in housing adds to woes of India’s singles