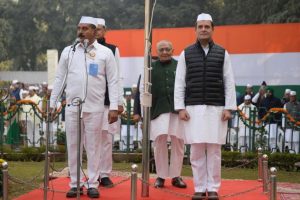 India’s oldest political party, Congress celebrated its 134th Foundation Day on Friday at the party headquarters by hoisting the national flag and remembering some of its iconic leaders and freedom fighters.

Congress party tweeted, “On the 134th #CongressFoundationDay Congress President @RahulGandhi along with senior leaders from the party hoist the national flag & pay their respects to the long history of this vibrant political movement.”

“On #CongressFoundationDay let us celebrate & acknowledge the selfless service & contributions of millions of Congress workers, men & women, who have helped build & sustain the Congress party over the ages. We owe these unsung heroes our gratitude & respect. I salute them all,” Rahul Gandhi tweeted.

Former prime minister Dr Manmohan Singh and senior Congress leaders including Ashok Gehlot, Kapil Sibal, Shashi Tharoor and among others also arrived at the party headquarters to celebrate the day.