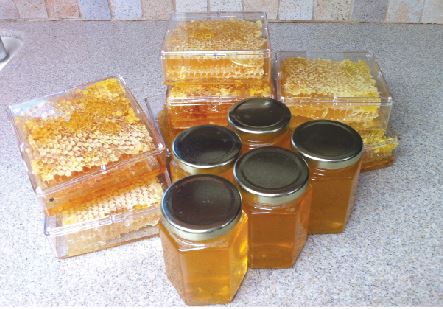 The raging farmers’ protest against the farm laws notwithstanding, a novel initiative of the Haryana government is underway to set up the country’s first honey trade centre (called `mandi in Hindi) to support farmers.

Expected to be functional by middle of this year, the centre also aims to offer an alternative to big brands recently caught adulterating honey with sugar syrups.

Haryana is among top seven states in honey production, yielding around 4,500 metric ton every year, thanks to favourable agro climatic conditions for bee keeping. The trade centre, coming up at Kurukshetra will integrate around 5,000 beekeepers of the state, helping them with marketing and sale on lines of other agricultural produce.

“The upcoming honey trade centre is part of the integrated beekeeping development centre (IBDC), an Indo-Israel agriculture project, which is also first of its kind in the country established by the state government about three years ago with Rs 10.5 crore’’, says Dr A S Saini, Director General, Horticulture Department, Haryana. “The trade centre, which would also have a high-end quality test lab, will fix a price for the honey or its products and even give the price difference to honey farmers in case the traders buy the same at a lower rate.” (Unlike several crops honey does neither have minimum support price nor is not covered under government scheme for vegetables).

Quoting department’s records, the senior officials including deputy director, Dr Billu Yadav says that against a humble beginning with about 28,000 bee-colonies of honey bees of Apis mellifera species in 2005, Haryana today has more than 3,50,000, colonies. Also, against the then annual production 275 metric ton (MT) of honey, the state’s production has increased to over 4,500 MT.

“Likewise, against a negligible presence then, the beekeeping in Haryana today has more than 5,000 beekeepers who are actively involved while the business is said to have been indirectly providing employment to more than 3,00,000 beekeepers in the state’’, he adds.

The venture holds promise as the market for honey is steadily picking up in the country even though the honey is still not being used in the form of food and its per capita annual consumption is only about 20 gms in India, while in other countries where it is considered as a food, like in Germany, honey’s per capita consumption is 1.8 kilogram. In Asia, Japan has the highest per capita honey consumption which is about 600 grams, Dr Yadav says.

In Haryana, the farmers who have been active in the business elaborate how they have found it to be lucrative. Subhash Chand of Yamunanagar, who visits different areas in Haryana for honey collection from mustard, sunflowers and eucalyptus fields, recalls how he his average annual income has increased to 10 lakh in recent years from the earlier income of less than 1 lakh till 2005. “From about 50 boxes in late 1990s, I today have 1,500 boxes for bee-breeding and I sell these boxes, besides collected honey’’, he explains. “But, the rates have since the past couple of years come down from peak 160 kg to 70 kg now while the fields, especially sunflowers, which is often not lucrative, are also shrinking.” Deepak Singla, Kurukshetra, who has a similar story, says the business has now become his passion.

Honey producers like Anil Kumar of Hisar bemoan the lack of awareness about pure and quality honey in the domestic market. “It is one of the major reasons behind our struggle to get honey’s due price’’, he says.

Darshan Kumar of Kurukshetra also airs same views adding that the honey producers are still struggling hard — like all the other farmers — to get the due price for their quality products.

Experts say that the different cropping patterns due to different soil types, irrigation facilities, temperature, relative humidity and the agro-climatic conditions prevailing in the Haryana are very favorable for beekeeping with Apis mellifera.

Dr S K Sharma, former head of honey bee-keeping and management section, department of entomology, CCS Haryana Agriculture University (HAU), Hisar), says that business of honey collective from mustard, eucalyptus and Bt cotton can be lucrative as mustard is the main crop in south Haryana (districts Mahendergarh, Rewari, Bhiwani, Charkhi Dadri, Jhajjar, Jind and Kaithal). Bt cotton is main crop in Hisar, Sirsa, Jhajjar, Kaithal and eucalyptus, in Karnal, Kurukshetra, Panchkula and Yamunanagar. “The area of sunflower, which is sown in Yamunanagar, Kurukshetra and Karnal, is, however, shrinking rapidly because of being less remunerative’’, he says.

The beekeepers in the state rear Apis mellifera bees, the queen of which is highly prolific and lays about 1,500-2,000 eggs per day during honey flow season. Therefore, the colonies always remain in good strength. To maintain their strength during dearth period, these colonies are regularly migrated in those areas where plenty of bee floras is available in that season. In north parts of Haryana, eucalyptus, toria, pigeon pea, sunflower, berseem etc are grown in plenty, whereas, in south west zone, the crops like mustard, acacia, ber (zizyphus), bajra (pear millet) and cotton are grown in large areas, the officials of state horticulture department explain.

In India, there are about 2.0 million bee colonies with estimated annual production of around 1,05,000 metric tonnes of honey including honey from wild honey bees. It occupies eighth position in terms of total honey production in the world.

The average yield of honey from domesticated bees is quiet low. In India, two types of honey viz apiary honey (domesticated bees) and squeezed honey (wild bees) is produced. About 35,000 to 40,000 tonnes of honey is exported to more than 42 countries valued of 1,000 crores. The major markets for Indian honey are Germany, USA, UK, Japan, France, Italy and Spain. There are 45,000 species of plants and shrubs, which comprise 7% of the world flora. Only 10 % of the existing potential has been utilized so far, experts of the department say.

India has a potential to keep about 120 million bee colonies that can provide self-employment to over 12 million rural and tribal families. In terms of production, these bee colonies can produce over 1.2 million tonnes of honey and about 15,000 tonnes of beeswax, they add. There are a number of small scale industries run on honey and other bee hives products namely bee-wax, pollen, propolis, royal jelly and bee venom, the experts add.