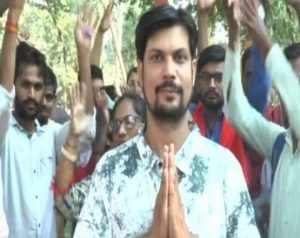 Sudeep Shukla, a software engineer by profession is set to contest the upcoming assembly polls from Madhya Pradesh’s Satna as an independent candidate. Shukla is a deaf and mute person and claims support of almost 50,000 differently-abled people in the city.

If elected, Shukla will become the first Indian deaf and mute person to become an MLA in the country.

He decided to quit his job to pursue his political ambitions and felt a need to do something about the atrocities on the differently-abled people, especially the deaf and mute persons.

Shukla is getting the support from Gyanendra Purohit, who runs an NGO called Anand Service Society for the differently-abled persons. According to reports Purohit said that they are inviting deaf and mute politicians from across the world.

Purohit is also acting as an advisor to Shukla and said that for election campaigning they have appointed around 1,000 differently-abled volunteers in Satna and will also organize street shows in support of Shukla.

Shukla’s demands include reservation of seats or nomination of the differently-abled in the assemblies. “This country does not need those who can speak and hear but those who can perform. And I believe in action,” Gyanendra Purohit said quoting Shukla.