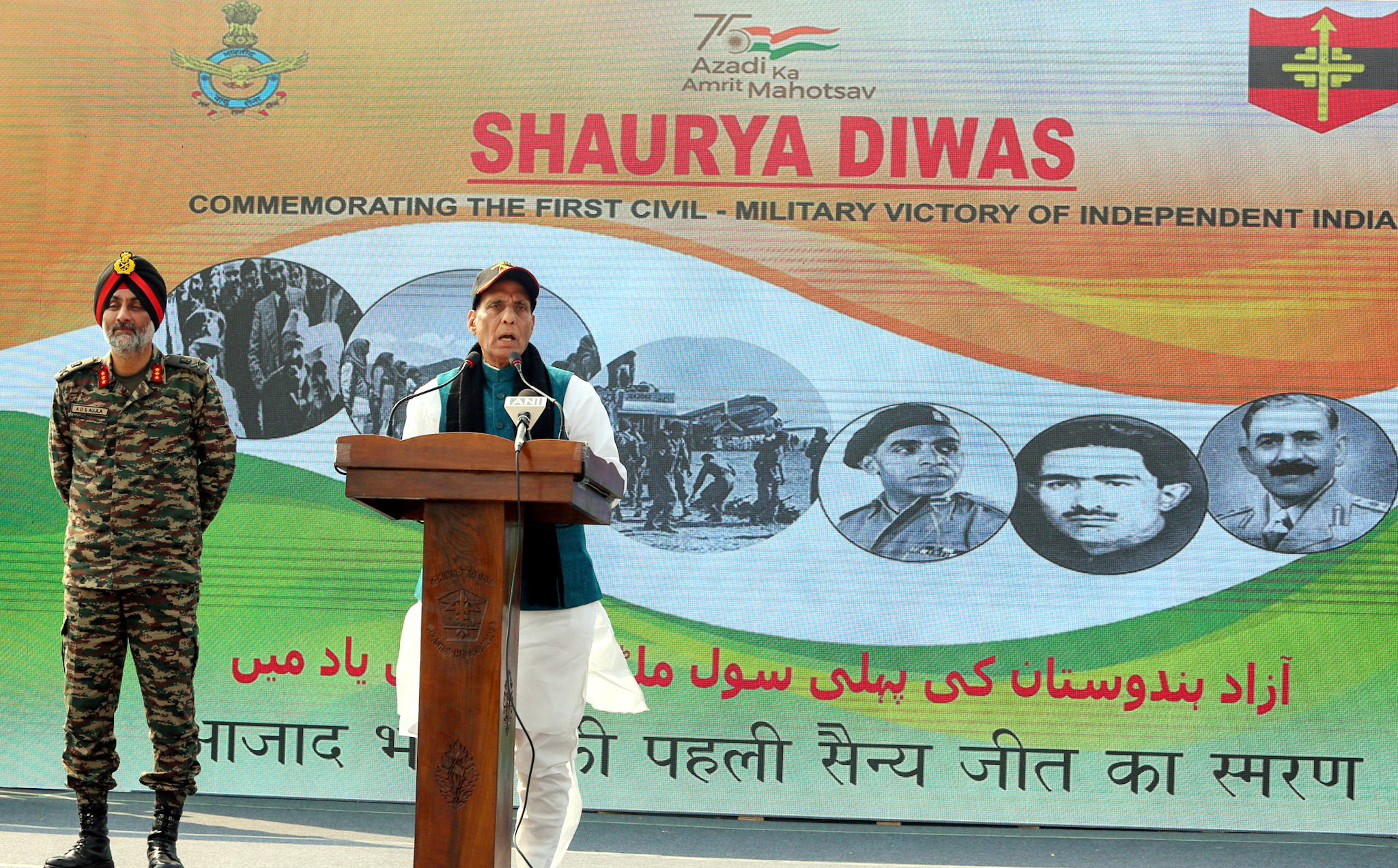 DM’s remarks that full integration of J-K will complete only when PoK will be reunited with India reveals that the government is no longer hampered by the continuing violence in Kashmir as it seeks to take the offensive into the territory occupied by Pakistan, writes Riyaz Wani

Visiting Jammu and Kashmir on October 27 to celebrate the landing of Indian soldiers in the former state on the same day in 1947, Defence Minister Rajnath Singh said the mission of full integration of J&K that started on August 5, 2019 “will complete when Gilgit-Baltistan and areas of the Pakistan Occupied Kashmir (PoK) will reunite with India.”

“This is just the beginning. The mission will complete only when Gilgit Baltistan and areas of PoK reunite with India. Also, when justice is delivered to the refugees of 1947 and they get their land and homes back. The day is not far away,” Singh said while referring to the resolution passed by Parliament on retrieving PoK in 1994. “We feel the pain of residents of PoK, facing atrocities and violation of their rights at the hands of Pakistan. On this side, Kashmir and Ladakh are set on a new path of development and prosperity (post-August 5, 2019).”

The Defence Minister’s statement has since elicited no response from Pakistan which also stakes claim to the entire Jammu and Kashmir and seeks a plebiscite in the region as per the United Nations resolutions. This has made Kashmir a longstanding bone of contention between the two countries, leading to three wars between them so far and the ongoing decades-long turmoil in the region.

Making Singh’s threat to take Pakistan Occupied Kashmir by force was more telling was the occasion – October 27, 1947 – when Indian Army first landed in Kashmir a day after the then Maharaja of the state signed the instrument of accession.

This is the second time this year that the defence minister has called for taking back the PoK. Earlier during his visit to the union territory in July, Singh said Jammu and Kashmir would always be an integral part of India and the parts of Kashmir and Gilgit-Baltistan have been illegally occupied by Pakistan. He also expressed India’s resolve to capture Pakistani-controlled parts of Kashmir as well. “If Amarnath is on this side, how can Maa Sharda remain on the other,” Singh said in Jammu on the occasion of Kargil Vijay Diwas.

However, experts have cautioned against any bid to recapture PoK which India considers its legitimate part by virtue of the Instrument of Accession whereby the entire J&K as it existed then – including Gilgit-Baltistan – is said to have joined India.

PoK has grown in importance over time in India’s strategic calculus because of its location. It shares borders with Pakistan’s Punjab, North-West Frontier Provinces, the Wakhan Corridor of Afghanistan to the north-west, China’s Xinjiang province to the north, and Jammu and Kashmir to the east.

But since China has investments in PoK and especially in Gilgit-Baltistan which has become a part of its Belt Road Initiative, it is feared that an attack on PoK would trigger “a two-front situation.”

“India could face retaliation from China also,” said Naseer Ahmad, author of Kashmir Pending. “This could result in war simultaneously with the two countries which would not be a helpful situation from India’s point of view,”

If anything, the defence minister’s adoption of an aggressive line on PoK reflects the dismal state of India’s relations with Pakistan which has currently plunged into chaos following ousted Pakistan prime minister Imran Khan’s protest march towards the Pakistani capital during which he survived an assassination bid.  .

The Pakistani government has tried to stop the march, but to no avail.  Khan has been claiming his government was toppled by the United States miffed with his growing closeness to Russia and China. He has been demanding the resignation of the government and the holding of fresh elections. While the Pakistan government, backed by the military establishment, is unlikely to resign in the near term, Khan’s stubborn political campaign has destabilized the country. At the same time, his popularity has skyrocketed and in case of an early election, he is expected to return to power with a landslide majority.

One fallout of this troubled situation in the country is that there is no hope for an India-Pakistan dialogue. The three and a half years of Khan’s term saw relations between the two neighbours nosedive.  And with the revocation of Article 370 in August 2019, the ties deteriorated almost to the point of no return. Khan became one of the fiercest critics of the Indian government. But in February 2021, the militaries of the two countries dramatically signed a ceasefire agreement.

The move came reportedly following an extended back-channel dialogue between the two countries. But thereafter there were no efforts to improve the relations. Or to resume dialogue that otherwise appeared a logical course of action following the ceasefire. The reason for this was Pakistan’s insistence that India reverse the repeal of Article 370 but for New Delhi, the move is now a fait accompli.

Going forward, the situation looks bleak. Should Shabaz Sharif’s government continue, there will be little chance of the relations between India and Pakistan reviving in the near to medium future.

Meanwhile, a halt to the frequent firing exchanges along the Line of Control has made a redeeming difference to the lives of lakhs of border residents on both sides of the border.  But it won’t change anything as far as the situation in the Valley where militancy continues to linger. This problem could certainly have been addressed through a dialogue between the two countries, whose chances now look slim until after the fresh national elections are held, first in Pakistan in 2023 followed by one in India in 2024. Sharif’s survival in power or otherwise will make no difference to this reality.

Although Kashmir was regarded as one of the places that could be most impacted by a Taliban controlled Afghanistan, this hasn’t happened even a year after the militia’s return to power.  Over the last three years, even though the militancy in Kashmir has been low-key, and a large number of militants have been killed, the militancy is very much alive and kicking.

Ever since the withdrawal of J&K autonomy in August 2019, around 500 militants have been killed in the UT, most of them local youths. Though this has reduced the number of militants, the violence has continued unchanged. And over the last year, the violence has increased as militants have chosen to attack soft targets – civilians, panchayat workers, J&K police personnel visiting home, outsiders and minorities – instead of engaging security personnel. Security forces, as a result, now not only have to combat militancy but also protect a large section of the population including many from among their own ranks.

In such a context, the defence minister’s PoK remarks reveal that India is no longer hampered by the violence in Kashmir, and seeks to take the offensive into the part of the territory occupied by Pakistan. But as of now, the execution of this strategy on the ground has little practical possibility.